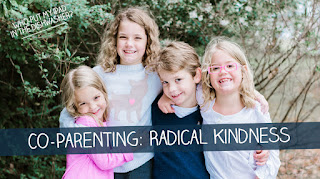 “Radical kindness” Seriously, it blows my mind. I’m not exactly sure I how I would describe it; however, it’s something that I’ve kind of adopted recently as a personal goal. I love that thought of being kind to people. Not occasional or half-baked kindness. Just a type of ever present authentic kindness that makes people smile. Maybe my own personal favorite definition would be that I want to be kindness to people not just do kind things for people. I mean, I know it's impossible to be like that all the time, but geez isn't that such a fun goal!?!

Like I said, I’ve been trying to live that little motto for quite a while, but recently I wanted to explore that concept in the realm of co-parenting. Let’s be frank here… Co-parenting isn’t always the easiest road. Separating the relationship stuff from the parenting stuff can get ugly. Especially since for many of us they were intertwined for so long. There’s just so much hurt, feelings, and emotional baggage that attached.

It took me a long time to get emotionally stable and solid even after the divorce; however, there are still some hurts that come up from time to time (on both sides I’m positive). Just little things. I think the longer Crissy and I learn to parent as individuals, not a couple, the more I’m learning a few things about the process. I wanted to discuss those things a little bit:

1) When their mom isn’t around my kids are ultra-observant of how I talk, act, and react about their mom. While there is time for truth, I don’t think I could be convinced a child should ever hear anything bad or negative about either of their parents coming from the other. Again, this can be a tough one because some questions don’t have easy answers. To be honest I’m still learning on this one. Normally I just try to handle each direct question carefully, but to be honest I firmly believe that if we act with integrity and maintain a positive view of the other parent for own kids and also within our own minds, honest conversation can be presented in a loving manner. I’m blessed that Crissy and I have established an awesome view and outlook of each other for our kids. Although the kids might go back and forth between who they are closer with at any given time, they have a pretty rock solid foundation about the way kindness is demonstrated between us.

2) Kindness is also just letting some things go. This is for both past and current decisions. None of us are perfect. I’m learning that it’s so poisonous to compare what she did that hurt me vs what I did to hurt her. We can dwell on the past or forgive and move on. Also, we can critique current behaviors and character flaws until the sun comes up and what have we accomplished?  Just more and more hostility. At the end of the day, she might not like current life choices and I might not like hers. She might not agree on what I think is best for the kids, and I might not agree with what she thinks is best. Sometimes we get so caught up with winning an argument about “what’s best” for our kids that we end up just creating more hostility. I’ve learned sometimes it’s just better to compromise. Even if that compromise means, us meeting the other party 90% of the way. It still establishes a foundation of working together.

Truthfully, many of us might be on the giving end on the compromise most of the time. It’s infuriating to say the least. Feeling like the one in the co-parenting partnership that always gives in gives us all sorts of feelings of doubt: What if I’m just the strict parent all the time? What if they prefer them over me? Why do they always get to do fun things, while I’m just stuck trying to scrape together pennies for bills?  My thoughts are that are this…Most of the things were worry about revolve around “me”.  Me, Myself and I. I’m mostly about how my kids will view me or feel sorry for myself because I feel treated unfairly. Things won’t always be fair I promise you. However no matter we feel in the moment, I 100% believe that kids are way more emotionally intelligent than we think. If we act in kindness and love towards their other parent, we are building a bank of integrity in our kids hearts towards us. They might not understand it or even be aware of what the compromises we each might make, but they will grow into it. Hopefully, both parents represent each other with kindness and respect. Hopefully, both parents get treated fairly and thoughtfully. Even if not, even if the other parent is constantly filling their head with untruths, they will remember the positivity and respect we keep in refusing to act with unkindness. So let’s allow our love and kindness speak for us. I promise it’s tough. It can feel like a one way street a lot, and honestly it’s impossible to do 100% of the time; however, just giving it our best attempt is very much worth it.

3) Just because our kids or other parents aren’t around us at the time, doesn’t give us the right to be rude or unkind. Right before I got married my dad gave me only one piece of advice. He said “Seth, never say anything to anyone that would leave a negative feeling about your spouse.” That stuck with me through marriage. And now into divorce and co-parenting. Now of course, we need to have a few people we trust to vent to or seek advice from, but there’s seriously no need to openly put down a child’s parent in conversation or on social media…Because really, deep down we know how to hurt them. We were once intimate and close with this person. We know their fears, insecurities, and embarrassments. That gives us A LOT of ammo if we choose to put them down publicly. There are times it can take some serious restraint to just keep our mouth shut, but it’s worth it. Even a little mean joke can be so very hurtful if it’s framed in that way we know would hurt them. Maybe even use our former intimacy and closeness with that person to build them up in public. I assure you that if we publicly speak kindly about people (even your ex), it will put us in a better place emotionally and spiritually.

So yeah, that’s my co-parenting goal. To be radically kind. The further I strive to be forgiving and admitting my own faults/mistakes, the more I feel Crissy and me becoming something more than two “divorced individuals trying to get along and raise our kids”. It’s becoming more like “Stevie, Neela, Titus, and Olive’s parents loving them and working together”.  I'm thankful for her, and she is thankful for me.