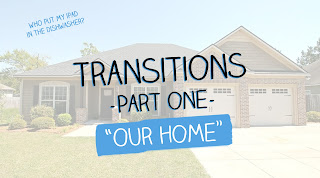 So I haven't written anything in quite a while. Life's been a whirlwind of late nights, hard work, and change. I thought it would be fun to kinda chronicle what's been going on the past few months in a little blog series. This is the first entry of that series, which I'm calling "Transitions."

One of the most significant changes to the Megow way of life is the fact that we officially sold our home. Since my divorce, it's been something I've wanted to do, but never had the push behind me to do all of the work necessary to make it happen. Now that we have officially closed on our home of 7 years, I really took time to reflect on the 5 of those years that were specifically just me and the kids.

At first, immediately after the divorce, I wanted out of that house. Just sell it, take my losses, and move on to somewhere new. However, after praying and using common sense I decided to keep things as stable as possible for my kids. Their life had been kinda turned upside down so having their home remain a constant safe place made sense.

It's so interesting thinking back on my memories of this home. At first it was an exciting "final" home for me and my ex-wife, then turned into somewhat of a prison to me, then finally into a safe haven for the kids and me. I wanted to touch on each of these three stages and just jot them down so in 20 to 30 years it won't fade with my memory.

1) The supposed "forever home."  My ex-wife LOVED this house, and I hate moving so this was going to be our forever home. Her father graciously built us the house and sold it to us for an extremely inexpensive price. To this day, I'm so grateful for that. Fun fact, when it was being built, it was accidentally painted bright, pumpkin orange! Hahaha. We had to get it repainted of course. Yikes. 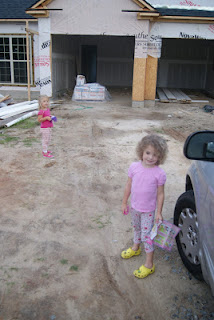 Look at tiny Stevie and Neela! 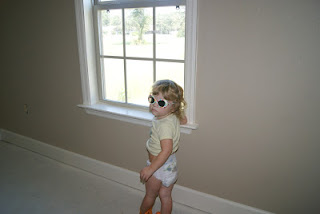 Titus checking out his room with some sweet shadez on 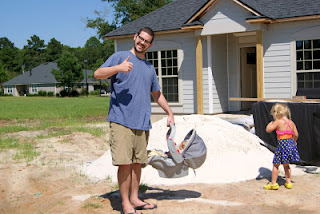 Me with Olive in tow

Hahaha. That orange was brutal!

It was really a perfect little house and neighborhood. We moved in and quickly became friends with our neighbors, and super close friends with one particular family (The Cumbess's). Zakk and I soon became very tight and hung out all the time. Our kids would just walk over to each other's house daily. I have some stories about our kids and their random activities, but I'll probably pass on sharing those on the world wide web. Haha. It really was a great little home for us: friends, nice yard, brand new everything, tons of neighborhood kids to play with, and right across the street from their school.

2) House arrest. Once my ex started to leave and finally left for good, man... it felt like I was a prisoner in that house. We could only afford one cell phone at the time. So she took that phone (I've talked about this before, so I won't go into it, but I was trying my best to make it work) and I wanted her to have a way to call someone for help if she needed it. Since the kids were currently around the ages 6,4,3, and 2, they needed to be home sleeping. I felt so trapped in that house. I didn't have a phone, most of my good friends had moved (including my neighbor), and my family had moved, too. I was just there every night. I couldn't leave and had no one to talk to. Granted it was a nice home to be trapped in, but it became extremely claustrophobic. Thankfully, God did some big work in me as a man and a father. So after about a year of feeling like that, I (and the kids) matured enough to move onto the final stage in our house story.

3) Our safe haven. I was feeling a lot more positive about my purpose in life. Also the kids had grown up a bit. Life seemed to be hopeful and on the uptick. The divorce was official and though we didn't have much money, I was able to get a phone. We started going out and doing life at night. Reconnecting with old friends. The kids having sleep overs. Massive kid friendly parties. Instead of it being somewhere I felt trapped, it became a place where the kids and I retreated to enjoy our time together (like a home should be). When things with their mom would pop up or other random stuff that happens in life, that house was a constant. It was well prayed over and was so so full of peace and joy. Hahahaha, Now... working full time and raising my four semi-feral children resulted in having not the tidiest home; however, it proved to be something much better than perfectly clean. It turned out to be just perfect for us.

I watched them learn to read and write at that craft paint and marker covered kitchen table, observed them discover their love of animals in the creek next to our house, developed super tight-knit bonds with them individually in our special dad time that we'd carve out for each of them in the living room, see their creativity literally grow and come to life on our family art wall, and finally watch them basically demolish anything nice that I owned with their craziness. Hahaha. Excuse me while I post a few snapshots down memory lane... ;) 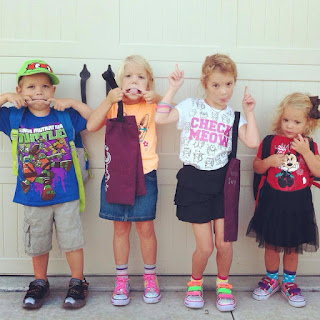 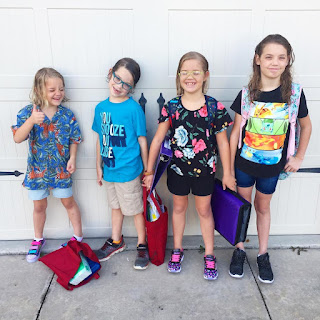 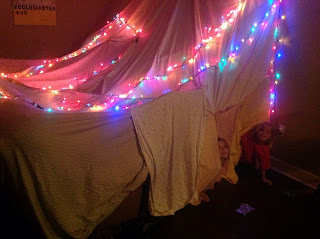 One of many epic blanket forts 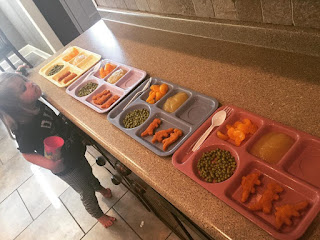 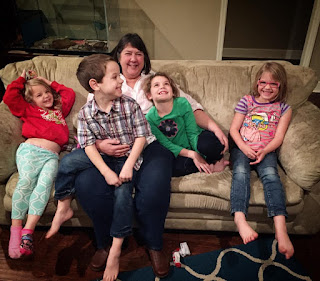 Surprise visits from Mamaw and Paw! 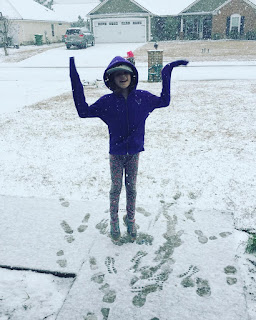 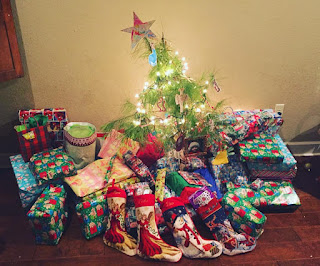 Starting in 2015, the kids and I began the tradition of finding and chopping down our own Charlie Brown Christmas trees. I honestly don't think I'll ever stop. 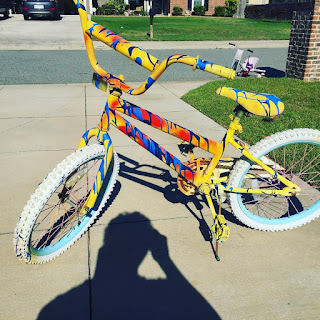 The bike Titus learned to ride on. A new bike wasn't in the budget and someone gave us a pink fairy one. So we took it in the garage and repainted it with leftover craft paint to give it a sweet 90's look. 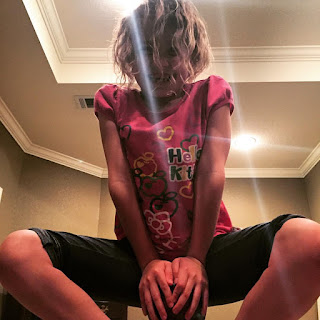 Stevie used to wake me up on weekend mornings like this. :) I loved it. 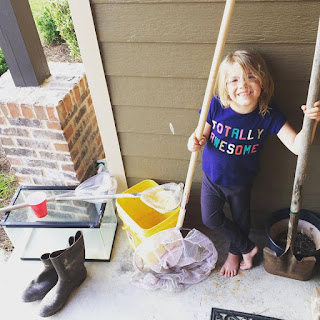 Prepping for one of our hot summer frog hunt nights. 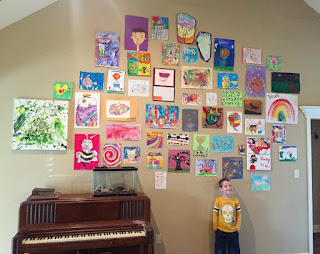 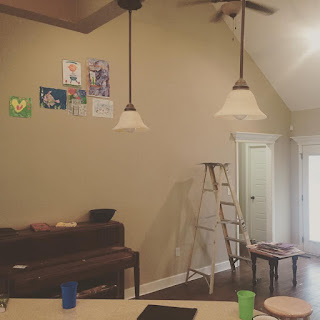 Taking down our art wall to repaint and sell the house :-/ 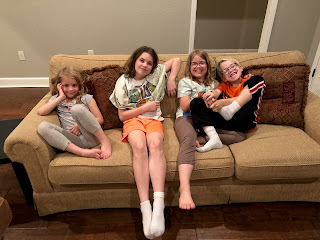 The very last picture I took of the crew in our old house. We started to load up the moving truck right after snapping this pic.

It's hard to say what I'll miss most about that house. And I'm positive each of the kids will say something different as well. But one thing's for sure. I'm thankful that it turned into a real home for me and the kids. I'm so excited to see what is in store for us in the future.

Just to update everyone. We are still living in Valdosta, GA until I find a job in the PA/NJ area. In the meantime, the kids and I are just hanging out. We found a house to rent month to month with a pool!! The kids are STOKED!! They swim most of the day and are in pure heaven. They have already planned/threw a pool slumber party for their friends. Complete with detailed schedule of course (courtesy of Stevie). ;) 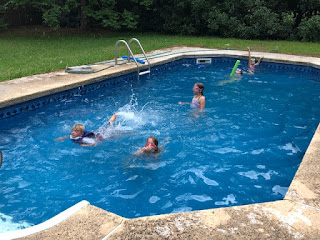 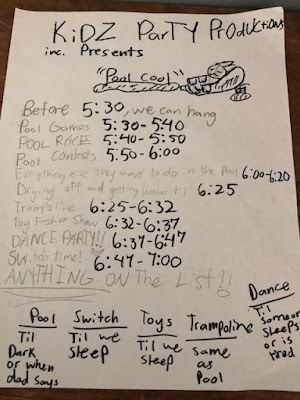 That being said, we are still local (and probably not for long) so if ya wanna hang out or visit before we move up north, let me know!


Be Blessed and Be a Blessing,
Seth
Posted by Seth Megow at 9:38 PM 13 comments: