Mr. Rogers and Me

Hello neighbor! If you know me at all or follow me on social media, it’s no surprise that I love Fred Rogers. I’m constantly posting his quotes on my Facebook and Instagram. I have Mr. Rogers shirts. I photoshopped on one my favorite quotes as my office door sign at work. Even the my kids’ bed times songs are two of his originals. So this post I want to explain why I admire this man’s life work. 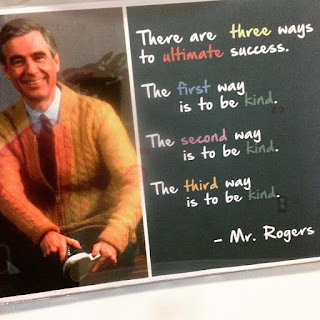 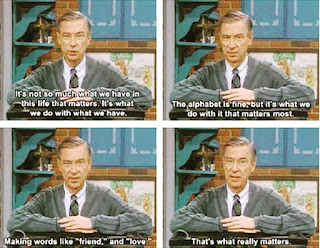 Growing up Mr. Rogers was a staple to me. I remember turning the knob the Channel 8 and watching him for 30 minutes. My favorite part was when he went outside and played in his sandbox. I used to just love that. My parents loved it too. Just from his television show demeanor, the viewer could sense that this was no run-of-the-mill television host. Mr. Rogers was clearly a genuine man who mission was also clear; he wanted to spread love, comfort, and acceptance in world fueled by greed and discontentment. Even as a small child, I could sense this over the airwaves. Of course, Mr. Rogers soon came to be my favorite tv program. However, time passes and we grow up. I moved on to Ninja Turtles and Darkwing Duck (both good shows I might add). But Mr. Rogers just kind of drifted off into memory as I outgrew his ultra-simple and routine show.

It wasn’t until many years passed that I thought of him again. To this day I have no idea why he popped into my head, but I can remember when and why. It was a long lonely night when my life seemed upside down. The kids were asleep, and I was just lying in bed trying to think of something to pick me up. I prayed constantly, listened to uplifting music every night, and kept a clear mind. That night though, I felt like I just needed something I could see or hear. I just felt so down and discarded. Pretty much, I felt unloved and unliked. Out of the blue, a Mr. Rogers song popped in my head. I hadn’t heard it decades, but I could still remember the simple lyrics.

Immediately I jumped on my laptop and started searching about Fred Rogers. This is where the new chapter kind of turned started. I read everything I could find on him. I read books and watched documentaries. One thing became clear to me; I just felt this connection with this man. I was in awe of the manner in which he lived his life. I’m gonna give a ultra-quick bio in my own words real quick: 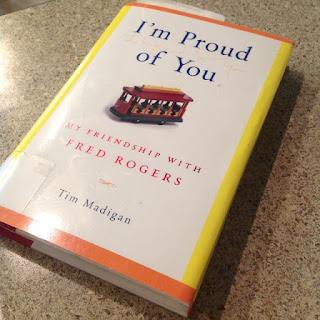 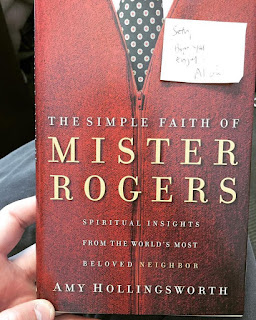 He was an ordained minister. He was a Christian that loved the Lord and was serious about his Walk. He was deeply committed to his family and friends. The way he made into television was he saw people throwing pies at other’s faces. It made him realize that television was becoming sort of mean and not kind. He saw the potential it had to change lives for the better. Instead of sitting idly by & ignoring it or simply complaining, he set out to make a difference. That’s what he did, and he did it successfully. When public television funding was being threatened to be cut, he lobbied and persuaded the members of the Congressional Committee to not only get rid of the budget drop, but the committee actually allocated MORE money that the original amount was. Are you curious how he did this? He talked softly and briefly and then sang them a song from his television program. From this, I learned that screaming or arguing isn’t necessary for a heart change in someone else.  Fred Rogers was also amazing talented and motivated. He wrote every song on Mr. Rogers Neighborhood. He would spend countless hours and takes doing the same scene over again, to get it perfect. He thought that the children deserved the best he had to offer. Mr. Rogers was transparent. Although technically, Mr. Rogers was a tv character; you won’t find many differences between Mr. Rogers (the tv show host) and Fred Rogers (the man). He was a man full of integrity. Which is pretty much one of my favorite traits to see in people.

Here’s probably the main I love him so much. However, it’s also a reason he got ridiculed by some. Never on his show did he plug any sort of religious bend on things or talk about spiritual matters. He never had an agenda, not tried to sway anyone on a particular topic. He just loved and accepted people. Instead of telling people all of the things they need to be, Fred would tell us that he likes us just the way we are. Instead of striving for giant feats, he focused on the small ones. For example, if you notice in the show when he’s feeding his fish, he will also announce to the audience that he is feeding them. This is because a blind girl’s parent once wrote the show and said her daughter was worried about him forgetting to feed them. Since she was blind she couldn’t see him doing it. So even decades later, each time he would feed the fish, he was verbally confirm this to the audience. Seriously, the man personally read and replied to every single piece of mail that was sent in to the show. He didn’t play favorites. Mr. Rogers just literally loved everyone for who they were and the way they were.

His show was based in a home to give kids that didn’t save a stable home life some sort of hope, stability, and positive place to escape to. In all of the things I’ve read about him, one of the main things people would say about Mr. Rogers is they could tell he genuinely cared about each and every one of them. Many adults now recall a sense of safety and security seeing this skinny, fragile looking man putting on sweaters that his mom knitted for him while he greets them hello. However, a lot of his work pouring into people’s hearts took place outside of the show. He was approached all of the time by letter or in person about people’s personal situations or questions. People could just sense something real about him. Really what they were sensing was Jesus living in that man. Even off of the show, he wasn’t quick to ram his beliefs down people’s throats. He just loved them and eventually they would want to know just want made him so joy and peace filled. He would then have the opportunity to share the Good News or pray with/for these people.  He wasn’t embarrassed or ashamed of his faith at all. I think he just understood that we need to win people’s trust before they soften their hearts to what we have to say.

Actually Mr. Rogers was one of the reasons I started this whole blog in the first place. Before all of the stuff happened, I was super involved in church activities, volunteering, visiting with people, etc. Suddenly, I was a solo parent of four with so many time restraints and much time being spent alone after the kids went to sleep. So I became a little depressed not being able to help or do what I felt called to you, help and encourage people. So I would stay up at night, just browsing the internet. I discovered that there is just so much negativity and meanness out there. It would just be a constant stream of things that weren’t positive or good for anyone’s heart... Then it kind of hit me. What if I tried to do what Mr. Rogers did? Instead of just watching it go by or complaining, maybe it’s time to roll up my sleeves and try to make a difference. So I started this blog. Hahahaha, by no means is it Mr. Rogers neighborhood or as great as that show was. It’s just my little way to brighten up the corner where I am. Does it make a difference? I like to think so. Because I feel it’s my calling. Like Mr. Rogers and his show, I don’t view this blog as a vehicle for constantly mentioning Jesus. I view it as a way to present the peace and love of the Lord without immediately turning people off to what God is doing in my life by jamming my beliefs down their throats. I truly love the way that God build my heart to encourage and evangelize. It’s not for everyone. Some people don’t care for the subtle approach. Honestly, I love that! We are all wired differently. Let’s embrace our uniqueness :)

I think that’s why I just love that man so much. On one of my darkest nights God put a tiny little song he wrote probably 40 years in my head, and I can safely say it kind of flipped my view on things. I remembered that people DID like me. He not only changed my life and impacted so many lives across the world, but is a constant reminder that sometimes it’s the tiny little things that matter most. We can’t even imagine the ripple effect of our actions and words. So let’s make decisions out of love. Because even the tiniest of interactions tomorrow at the coffee pot, a little song you make up in the car, or a kind deed for someone else could have such an astounding impact on someone’s life.

So in the words of Fred Rogers:

“You always make it a special day by just your being yourself."