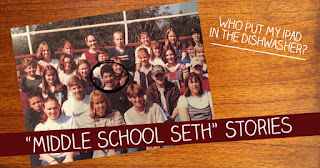 If you've been following the blog at all, you probably know how much I love to tell stories. For some reason, I had a few random memories from middle school pop up in my head and just wanted to share. I don't want this to be ultra long, so I'll just share a few.

I think I finally realized my true sense of humor around the age of 30. It's extremely understated and half serious. I just love when people don't really know if I'm being serious or not. So many times I'm internally laughing while some people laugh and others just kinda turn their head/feel pity for me. Hahaha. However as a kid, I hadn't yet grown to understand my sense of humor. However on occasion, I think I kind of nailed it. These are the moments I really remember. Just me internally dying laughing to myself while a lot of people just kinda sit there ultra confused.

My first real memory of this happened in second grade. I remember our class has been learning about plants that produce food. We skimmed briefly over the cacao tree. So at recess that day me and my friend Reggie made up a reggae song called "The Chocolate Tree". I still remember the song... *clears throat* "Chocolate Tree, Chocolate Tree, Everybody listen to the Chocolate Tree." Anyways when we got in from recess, me and Reggie asked the teacher if we could perform our song. She said yes. So we did. Right before the song started, I had the idea to do a dance while Reggie sang. I remember it was an interpretive dance about how I imagined I cacao bean must have felt being harvested, roasted, and produced into chocolate. So Reggie was just kinda stood their singing not paying attention to me, while I was mimed being torn apart, burned alive, pounded into tiny pieces, and then finally becoming a chocolate angel flowing into heaven. Towards the end, I could barely contain my laughter but I kept it together. I mean I was total straight-faced and looked dead serious.


I'm guessing it kinda of resembled this to onlookers.

I remember the teacher telling everyone not to laugh while looking utterly confused at this routine. In my head I remember thinking it was absolutely hysterical that the teacher had to force people to not laugh and was convinced I was dead serious about this being a moving dance piece. Finally, Reggie finished the song and I stood up from laying completely face down on the floor in an snow angel pose. We both didn't say a word, sat at our desks, and got out our math books. The teacher just kinda stood their staring at us so confused for a few seconds before awkwardly transitioning back into multiplication tables. Side note: I asked that teacher to marry me that year for Valentine's Day. She said no... but I'm pretty sure a few more dances would have sealed the deal.

Next, I played a lot of soccer growing up. Well. Let me rephrase that. I was on a soccer team a a lot growing up. It was a travel soccer league, so it was the same group of boys every year. I didn't really play that much. For two main reasons: 1) I was legitmatelly the worst kid on the team 2) I figured taking on the role of "Team Morale Officer" would better serve my teammates. Once mid-season our coach, for some random reason, decided to change our team name. I remember we all got to make nominations by writing them on a sheet of paper and putting them in a hat. After they were all read, the coach would read them out loud. When he got to my vote, he instantly knew who wrote it. He angrily mumbled "Flying Skydancers". Of course, I thought it was the funniest thing on earth. So from that point forward every single season, in every single game, I would shout "Flying Skydancers" after every group huddle and twirl around like a helicopter. The coach kinda hated me after awhile. Hahahaha. Oh yeah, I remember one thing that happened during a game (I played defense. So I was the last stop before the goalie). My best friend Will played on the team with me. I remember he was on the bench at the time and I was on the field. We were doing pretty well that game, so I kinda zoned out on defense and was goofing around. I remember making animal shapes with my hand and doing voices for each of the animals. Anyways, I noticed Will was watching me, so I walked over to the sideline was performing this little routine. I can't remember exactly what happened, but I do remember the coach screaming at me to get on defense because their team was coming downfield with the ball. I remember laughing so hard, because I just pictured this image of someone standing on the sidelines doing animal impressions for his friend on the bench during the middle of a game, and it was just too much. I literally couldn't walk from laughing so hard. They ended up scoring, while I was still leaned over guffawing. I got benched. Worth it.

Ok. So really this was the story that inspired this post. It popped in my head recently, and I laughed so hard telling it to my friend that I wanted to share with you guys. It was 8th grade algebra, and we had a teacher (who will remained unnamed) that seriously let us do whatever we wanted. One of my favorite activities would be to ask to go to the library to check out a book (during the middle of algebra class mind you). He would always say yes as long as we returned with a book. So me and my buddy Zack went to the library, and we kinda just goofed off for a few minutes. Finally, we noticed we had been there for way too long, so I grabbed a random book, checked out, and ran back to class. When I got to class I looked at my book. It was called "Jojo's Flying Sidekick" 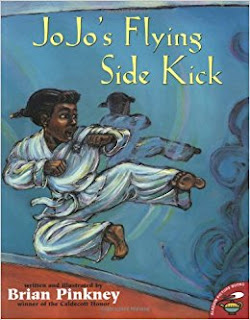 The remainder of class I spent reading this book. It was about a little girl who was scared of a tree in her front yard. She uses karate to face her fears, and does a flying side kick to the tree in the end. After reading it, I just kept laughing at this random, little kid book in the library. So I thought it would be hilarious to make an ultra big deal about it. After taking a few days to really think about what would be the funniest form of action to take, it suddenly hit me. I would form an official school club called "The Jo-Jo's flying sidekick Fan Club".

So later that week, my friend Zack and I went to the school's assistant principal and asked what the requirements were to form an official school club. He told us that we needed a teacher sponsor, and then to come back to him for approval. Duh, there was only one teacher we wanted. We went straight to our algebra teacher and asked him to be a teacher sponsor for our new club. He didn't even ask what kind of club. We didn't even fill out the form yet. We just handed him the blank form and he signed that junk. Holy crap. We were halfway there to getting this thing official. So the next day (in algebra class of course), we filled out all of the rest of the form and took it to the asst. principal. We sat down, handed him the form, and he read over it. I remember he just kinda stared at the form in utter confusion and looked at us. "Are you two serious? I mean what does this even mean? What is a Jo-Jo?" Ultra straight-faced, we went into a long diatribe about how the book challenges kids our age to face our fears by embracing the strength inside of us. Still confused he called our teacher to verify he signed this thing. Of course, our teacher had no idea what he was talking about, but finally remembered and confirmed that he agreed to be the teacher sponsor. The asst. principal just went wide eyed from confusion, shook his head, and signed the form making us a club.

Now what this meant for us was that we could have club meetings and hold fundraisers. Hahahaha. So of course that's exactly what we did. I didn't want to have to put down any real money to buy candy or something to resell, so we just made buttons with pieces of paper and safety pins that said something like "I love Jo-Jo". We sold them for a quarter a piece on the promise that all money raised would be used for a class party. Of course, we raised enough money that we bought snacks and had a class party (in algebra class) sponsored by the "Jo-Jo's flying sidekick Fan Club". However, having a party just wasn't enough. So me and my friend scheduled an appointment with the principal to talk about our club. Not the assistant principal. The real principal. We asked her to come to our algebra class and read the book out loud to us. Again, this book was written probably for the first grade reading level. She was also confused on how we got set up as a school club. And also why all of this was taking place in a advanced level eighth grade algebra course. She told us a maybe and we left. 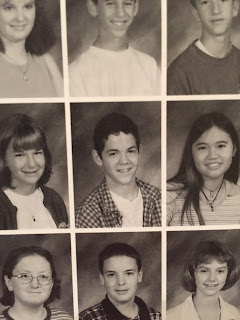 So we threw our party. It wasn't even a Friday. It was some random middle of the week day, like Tuesday. And of course, right in the middle of algebra class (when we were supposed to be learning about the Quadratic Formula). All of a sudden, the principal walked in and very confusedly walked up to the teacher, who directed her to me. I walked her up to the front of the room and handed her the book. She read the book out loud to us while we ate our cupcakes/chips and fought back the laughter. Afterwards, she called me and my friend out in the hallway and disbanded our club. Hahahaha. My next goal was to make it in the yearbook under the clubs section, but that dream got cut short. But it was definitely one of my favorite middle school memories. Side note: He actually was a good math teacher; I can still recite the Quadratic formula to this day. The trick is to sing it to the tune of 'Pop Goes the Weasel'.... All together now!! "X is equal to negative B, plus or minus the square root, of B squared minus 4 AC, all over 2 A."