Our Trip to LA! (Part Two-Disneyland) 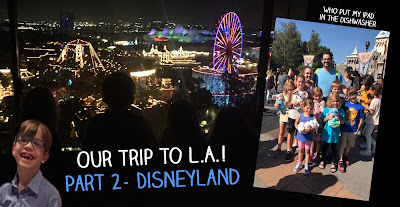 Welcome to 2019 Everyone! Hope everyone had a great holiday break!

I typically don't recap the specifics of events (parties, trips, etc.) on the blog, it is not my strong suit. It's mostly stories and life observations, but this was a special thing people asked to write about so I'm gladly doing it.

Let's pick up where we left off from our last post (which was the first half our trip to LA). Like I said, right after filming, Sarah and I both had to film a few cut-away shots. Then she had to fill out some paperwork for the show while the kids played. 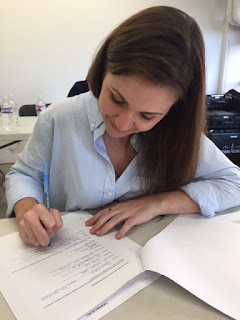 I was so excited to see her, I snapped a picture when she wasn't looking.
I hit the jackpot with this cutie. 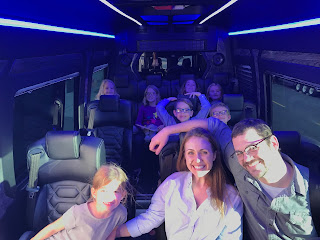 Everything was filmed, signed, and we were loaded into the big party bus on the way to Disneyland.


The kids were so excited! And also REALLY hungry. The filming/commute schedule got changed so my kids hadn't really eaten since that morning. By the time we arrived at the Disneyland Hotel, it was 8pm. After a quick pow-wow, Sarah and I decided she would take the kids to eat in the hotel buffet, while I finished checking in and unloading all of the bags to the rooms. Neela was with me at the check-in. With complete confidence (and completely oblivious to the line of people waiting), she walked straight up to the desk, slapped the "Disneyland" ticket from filming on the counter, looked the receptionist in the eyes and said, "We're here." Hahahahaha. She was convinced the Disneyland people were on pins and needles excitedly awaiting our arrival. She was definitely in some sort of "celebrity" mode. I laughed so hard.

So I got checked in, unloaded, and ran downstairs to the lobby to help feed the kids. Luckily, it was a buffet. However, I wasn't aware it was like $25 or something a person. Upon learning this and given the fact they hadn't eaten any real meal for like 12 hours, Sarah and I told them, "Have fun guys. Eat whatever the heck you want." It was a nice first meal as a complete unit (still not sure what to call our group?). So they had eaten and wanted to get dessert; I told the kids to knock themselves out. Olive ate like 3 of these treasure boxes made of and filled with chocolate. Titus ate the entire buffet out of strawberries and thought it was the funniest thing ever. 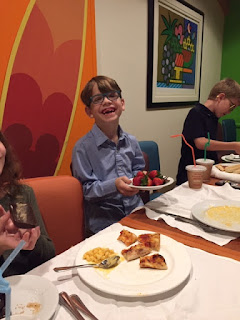 He and I were dying laughing at his multiple overflowing plates of his favorite fruit. 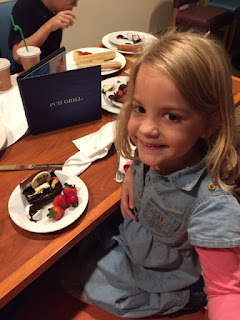 Olive and her favorite food ever assembled.
Fun fact: She asked me to make these for her birthday party next month.

We wrapped up dinner and headed up to our rooms. Ours were side by side, but not adjoining, so the kids were constantly running back and forth in the hallway between the rooms. After a few minutes, our kids discovered how to call each other's rooms. Not exaggerating when I say that I think our room phone rang about 78 times in the two days we were there. 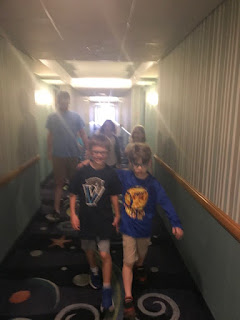 Two buddies leading the way to find our rooms.

We woke up the next morning and looked at the itinerary for the trip. The first thing was "Breakfast with Donald." It was the same buffet we went to the night before, except it was breakfast and there were cartoon characters. Since my kids have grown up in a house where their dad works for a costume shop, they've seen just about every cartoon mascot in history, so the thrill is kinda gone in that area. However, to my surprise, all 7 kids were freaking out to meet... Stitch. HAHAHAHA. Seriously, who even thinks of Stitch when they think of Disney? The food was super good and our waiter Steve was seriously so so patient and kind. Chatting with him was one of my favorite parts of  Disneyland. He thought it was hilarious that our kids completely wiped out the fruit bar the night before and then did it again at breakfast. I looked up and yup... each kid was loaded down with fruit. Except for Stevie who of course ate only chicken fingers. I swear that girl could happily survive solely on water and chicken fingers. 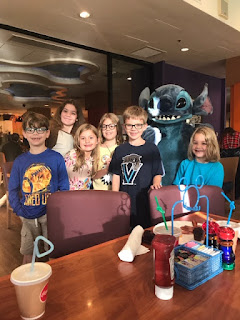 I swear I think Stitch was the most popular character at the breakfast. Every table of kids freaked out when they saw him.

After breakfast, we went back upstairs to pack for the day at the park. Once we packed a bag for the day, we headed out. Random side note: Man, it was so nice to be with someone who thinks like that. I'm more of a 'just go and figure it out along the way' person. Sarah is thankfully much more planned and organized. Sunscreen, water, chapstick, bandaids, hair ties for the girls, etc. She packs and prepares so well. It's one of the many reasons I'm so attracted to her. We are a pretty great blend of spontaneity and preparedness. 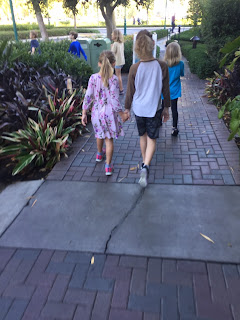 Stevie and Annika holding hands walking to the park.

Walking into the park was really pretty. They had it done up really nice for fall with pumpkins and flowers everywhere. The kids loved it and, unlike them, wanted to stop to take some pictures. 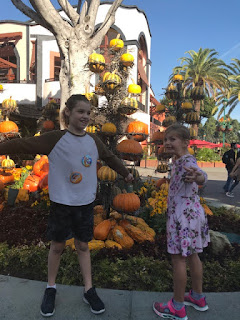 Stevie and Annika really bonded on this trip and are now "best friends" :D 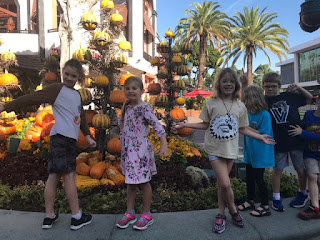 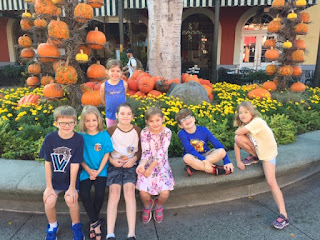 When we finally got into the park, I had to keep my promise to Neela to ride "one big ride." That girl is a thrill seeker if I have ever met one! However, none of the other kids wanted to ride one. So of course, Sarah being Sarah offered to take the other SIX while Neela and I waited in line for over an hour to ride Space Mountain. I felt really guilty taking her up on the offer, because six kids (three of which she'd just met yesterday) for an hour and a half in Disneyland is a lot. But Sarah was insistent and I promised Neela. (I HATE BREAKING PROMISES TO MY KIDS!) So I took her up on it. 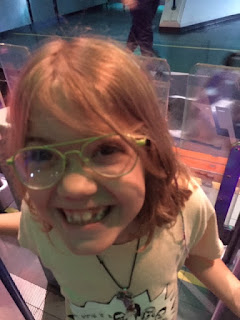 After about 75 minutes of waiting, we saw the ride boarding! 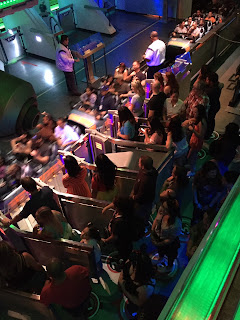 I'm so glad she got to ride it because she said it was the most thing fun she's ever done in her life. :D

While we were waiting, Sarah sent me some pics of them on a ride. She said it was so I could see how much fun the kids were having, but secretly I knew it was to keep me from feeling bad about her having all the kids by herself. ;) 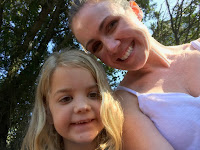 Once we met up, I felt the day start to turn around. We ate some lunch, snagged a group pic in front of the castle, and then our Fast Pass was ready for the interactive Star Wars Ride. We walked straight onto the ride. It was so sweet, and holy crap... that thing was fun!! The kids (and adults) LOVED it! Right when we got off, all of us wanted to do it again. But it was like a 2.5 hour without a fast pass so we decided to move on instead. 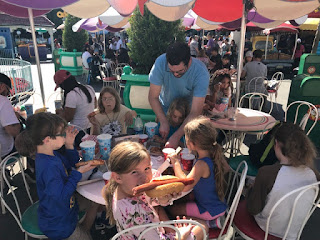 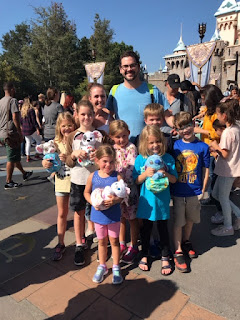 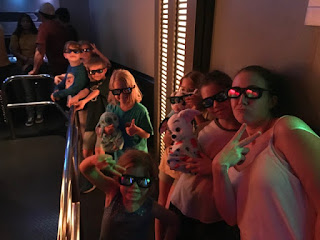 After the ride, we exited into a GIANT Star Wars store. Since Ellen gave us each a per diem for the trip, Sarah and I decided to give each kid $30 to buy whatever they would like at the park. The boys (including myself) could have spent about another hour in that store, but finally both of the boys decided on remote control droids to buy. Side note: Those remote control BB-8's are so mega fun. I borrow Titus' on occasion just to drive around the house. 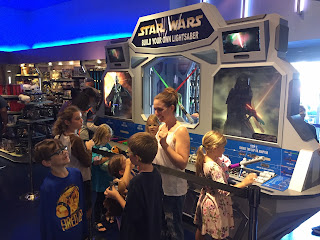 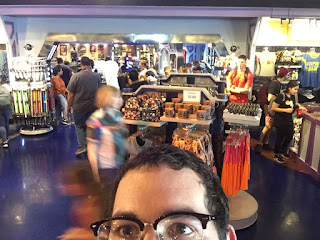 This store was MASSIVE!! I loved it!

It was about 4pm by now, so we took the kids to get some ice cream and watch the parade. Then the kids voted to head back to the hotel because they had a massive pool and giant water slide. Truthfully, Sarah and I didn't try to talk them out of it at all. Hahaha. It was a lot with 7 kids and long lines. Also, since it was the official Disneyland resort, the whole thing was Disney-themed anyway, so I don't even think the younger kids (well, Olive) even noticed. That girl is the most blissfully unaware child I have ever met. I get so envious of how she can be so joyfully absent minded about basically everything in life.

After swimming/water sliding/hot tubbing for a few hours, we walked around until we found a little, quaint diner to eat at. It was a nice relaxing evening after a 100% to the max day. Following dinner, we kinda strolled around before making it back to the hotel. The kids played, chatted, and snuggled on their last night together. I snuck this one picture of all of the kiddos overlooking the park at night out of the hotel window. 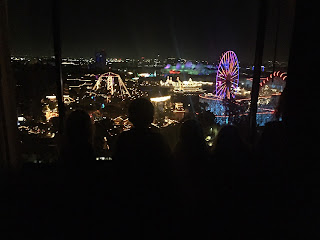 It was so fun hearing all of their recaps and excitement about the day.

The following morning, we had to get up early for the flight home. I think the party bus picked us up at like 7am to drop us off at the airport. Sarah and I sat next to each other and just chatted about the trip. Mostly, though, we talked about how I always brag that I am "unsurprisable," and she got me within the first few months of our relationship.

They dropped Sarah and her kids off at their terminal and us at ours. Everyone was tired, but a good tired. We were all satisfied and our hearts filled from that weekend. I thought every highlight of the trip was over until I had my first and only celebrity interaction boarding the plane to take us home. I was herding my kids through First Class to our seats at the back, when someone tapped me on my shoulder and an awkwardly familiar monotone voice said, "Excuse me sir, but I just have to say that you have the most beautiful children." I turned around and it was BEN STEIN! I just stood there in shock, but before I could even reply I got *nudged* from behind to hurry me along finding my seat. When we sat down, I told all of the random people around me that Ben Stein was on our flight! But no one knew who I was talking about. #societyfail Fun fact, 'Ferris Bueller's Day Off' was one of the movie choices, so it's probably good I wasn't sitting beside him or I would have freaked out and made a scene from the hilarious absurdity of this situation. Seriously, what are the freaking odds?! 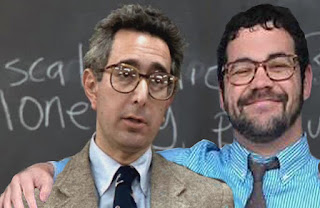 I mean, we are basically like best buds now.

Anyways, that was our LA trip. It was a wonderful memory and such a neat opportunity.