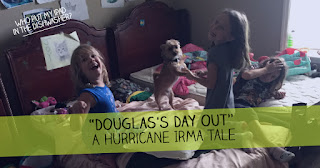 So I was cleaning off my laptop when I noticed a Word document that I didn't recognize. Upon opening, I found a story that Stevie, Neela, their best friend Josie, and I all wrote awhile back. It was during Hurricane Irma, and we had some friends staying with us because their house was around too many trees for it to be safe. There were A LOT of kids in the house, and we didn't have power for 3 days. So we started to get creative with entertainment. The kids really wanted to write a story on the computer. Luckily, my laptop was fully charged; I opened a Word document and just let them type. They thought of the idea of each writing chapters or writing them together and stitching it into one story. It sounded fun, so of course I wanted to participate.

I never read the story completely until now. I think it's so fun seeing all of the kids different writing styles. Probably my favorite was that Stevie went back and wrote a sign-off epilogue to the tale. She's so silly. Hope you enjoy this little light-hearted saga about our dog Douglas and his animal friends.

I'm going to keep all of the formatting the exact same as it was typed. Stevie spend a lot of time selecting how it looked. :)

Douglas’s    day     Out
Chapter One:    Mission  Douglas
By Stevie
Once   Upon   A  Time  there  lived  a  dog  his  name  was  Douglas. He was  so sweet . He loved kids. But one day he felt as if someone else was out there .So he went out looking for the person or kid who he felt he was looking for he knew it would be a journey but his heart depends on it. He grabbed his coat and walked. This was only the beginning of his long journey.
Chapter  two:  The Journey
By Stevie
Douglas walked across the city there were lots of people “Hi  doggy ,” yelled one man. It was very loud in the city. There was a lot of signs. He read one . It showed the  direction to Georgia. “That’s where Charlie lives,”  said Douglas. Douglas walked and walked.  He walked for 1 whole week. He didn’t care if the journey was long but he wanted to see the person or kid he desired to see.
Chapter   Three:   The Attack Of The Stray Cats
By Neela and Josie
Douglas ran into an alley as fast as he could. “ Dang it’s so loud in the city! I’ve never noticed. , “ said Douglas. Then all of a sudden  10 mean Ally cats came. Then the Ally cats sharpened their nails.  Then they ally cats striked. Then Douglas ran as fast as he could. Then the ally cats surrounded hi m. Then Douglas ran and beat up the cats and made friends with one named Yucky.

Chapter  four:  The Stinky Forest Neela and Josie
By Neela and Josie
Douglas and Yucky walked into the forest. Yucky saw a baby skunk and thought it was a mouse. Then Douglas saw a sign . He tried to warn her but it was to late yucky got skunked. Douglas said pee u !they ran out panniked. They could not sleep for 5 weeks because of the smell.And finnaly they found toamato soup.

Chapter five: first dog on the moon
By Neela
They saw a giant glowing bone .when they moved closer they saw a ufo . the ufo sucked them in. then then the alion took them to his planet puppypaws . then the alion inturduced himself he said my name is Jupiter . Jupiter showed him auround the planet.it looked cool. then the alions said goodbye and droped them off in gorgia .
Chapter six: snugglebug
By Josie
4 days lator they ran into a party of animal they all said aw look how cute . they all piled on top of him and cuddled . then a big black bear came and scared the animals off but he wanted to cuddle to. But they managed to sqeeze away.

Chapter seven:  Smartie Pants Dougie
By Seth
Douglas had a dream that he went to school and loved it! So when he woke up, he packed his lunch box full of bones and doggie treats and headed off to find himself a school for dogs. After walking around town for about an hour, he saw one! The name of the school was “Pawllege: The College for Dogs”. He went in the front door. Right when he walked in a big black and tan great dane greeted him. “Hello” said the big dog, “My name is Professor McKrangleBerry. Welcome to Pawllege. Would you like to go to school here?” Douglas was so happy that his tagged wagged so fast that it starting spinning around like a helicopter! He barked “Yes! I would love to go to school here!”  He did to go that school, and he learned so much that he earned a pe“degree”.  Once Douglas was done with school he so tired. He went home when to sleep. He had a dream about being a firefighter calendar model, so he woke up and packed his lunch box full of bones and doggie treats and…

Chapter eight: douglas and Charlie meet
By Josie
The next day douglas saw Charlie on a walk Charlie barked at yucky she said hiss hiss douglas and Charlie where so happy to see eachother  douglas  and yucky spent a night with Charlie but the next day they went to the megows house nella  and stevie loved duoglas and douglas loved them douglas knew this was who would adopt yucky and him

By: Stevie, Neela, Josie, and Seth

This story is not true. Yucky and Douglas are real so is Charlie. I hope you like the story if you want to see another chapter go to our blog: whoputmyipadinthedishwasher.com. We might make Douglas’s Day Out 2 so keep your eyes out for that. Facts about the authors……Josie and Neela are twins not really they just think they are. Charlie is a Standaurd Poodle. Douglas is a small Terrier mix adult dog.  We got the title well I got the title from Baby’s Day Out it’s really funny you should see it one day if you have time. We did this story when we had no internet.  Maybe one day you will write a funny or serious story. I hope you enjoy this story. But before I go I’m gonna say a few facts about dogs and cats just because that is what the characters are. You can skip this part I really don’t mind. Fact 1# Dogs have tiny or thin whiskers we can’t see only some I think. Fact 2# oh and we are doing dogs right now. But fact 2 a pug is a toy dog. Fact 3# When a dog has a wet nose that means it is healthy and happy, but if it is dry that means it is sick sad or uncomterble. Fact 4# really tanish whiteish beagles are rare. Cat facts now. Fact 1#cats don’t always land on their feet. Fact2# cats have whiskers to feel around them self. Fact 3# DON’T GIVE YOUR CAT MILK! Only kittens can have milk. Fact 4#not all cats hate water only some it is just more common for them to hate it. Fact 5# Not all cats and kittens don’t  like dogs it is just very common for them to not like them.

BOY WE GOT MORE THAN 1,OOO WORDS SO SICK, SO RAD, SO SO AWESOME!

EVERY THING IS AWESOME!      Peace,Love,Cupcakes and doggies
Douglas says bye bye!
We are outta here