I grew up playing soccer. I wasn't really that good, but my parents were super supportive and always signed me up, drove me to practices/games, and cheered from the sidelines at every game. I mean I was decent on defense, but I'm just not blessed with hardly any athletic ability at all. Also, I loved the idea of being the team morale support officer/bench entertainment. I viewed my job as critical. When all of the good kids were on the bench resting, I could help them relax by cracking some sweet jokes, pretend farting, or something similar. I remember one childhood soccer memory super vivid:

I was picking blackberries by the edge of the woods near the soccer field and I start hearing people screaming my name (not in a good way, haha). "Crap. I remember I was supposed to be playing in the game," I think to myself. Then I sprint back to the field, but I didn't want to lose my blackberries that I was picking and holding in the bottom of my jersey like I basket, so I kinda kept holding the bottom of my jersey up to keep all of the blackberries from spilling out as I ran to the field and jumped back in the game. It was then I realized that I probably wouldn't fulfill my childhood dream of becoming a professional soccer player...

So all of that being said, when I told my parents I was going to coach Titus and Olive's soccer team this year, my mom fell out laughing. hahaha 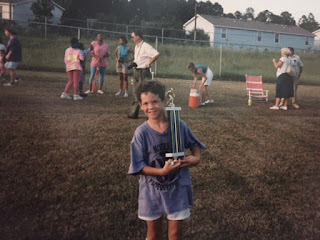 This was not only my first year coaching, but it was also Titus and Olive's first time ever playing. I mean we've kicked the ball around in the backyard, but that's it. Titus was kinda pumped about it, but he loves basketball much more and viewed this as a placeholder until b-ball season started again. Olive on the other hand was mega excited! It was fun that they could play on the same team, plus their age group was the "non competitive" league which I loved. My goal as a coach was to make sure all of the kids learned about the sport, enjoyed the sport, and got to play the sport. I'll 100% honest that I wouldn't be a great "play to win" coach. I would much rather have the kids when they are young and get them excited about playing. So my plan was to balance the learning aspect with the fun aspect. Also, this league didn't have goalies and the coaches got to run around on the field with the kids. It just all sounded super fun and good exercise for me too. hahaha

Long before the season started, I wanted us to be "The Thunder" simply so we could blare 'Thunderstruck by AC/DC' as our official team anthem. I picked yellow jerseys at the coaches meeting because duh...  I also thought it would be fun to make a team flag and have all of the kids sign it. So before the first practice Olive and I built a flag out of felt, some paint, and PVC pipes. It worked out pretty great and all of the kids on the team enjoyed it too! Another fun idea was to get giant banners for the team to run through every game. So each game we had a decorated banner for the kids to bust through. Sometimes, we had kids volunteer to make the banner and bring them to the next game (which I thought was the funnest idea EVER!) In my head, I knew we wouldn't be the 'best team', but I wanted us to be the 'fun team'. Each game the captain of the team got to carry the flag through the banner and around the field after the game. It was super fun!! 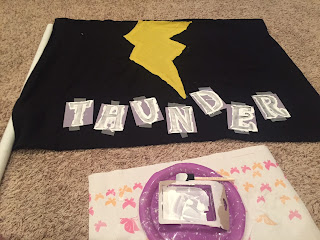 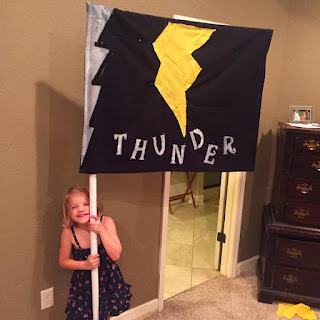 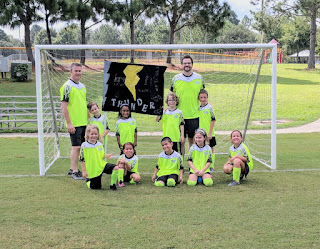 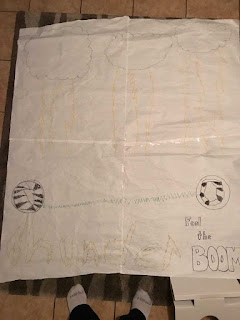 A banner made by a player

One of our banner run-throughs!!!

The kids on the team were seriously so so great. I really got attached to each one of them. They all tried so hard each game. Another minor (and secret) coaching achievement I set in my head was that I wanted each kid on the team to score a goal, and they did it! I believe our team record was 3 wins, 2 ties, and 2 losses. I'm not ultra sure, but I do know it was a great season. 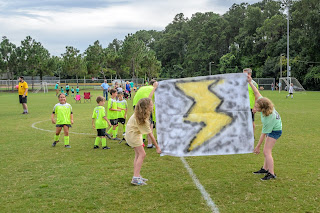 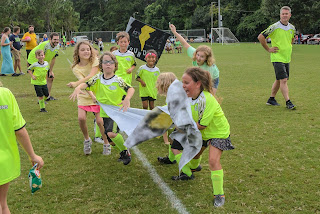 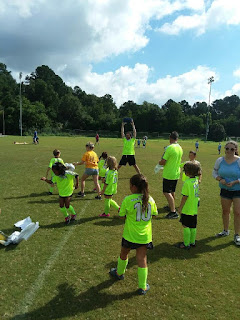 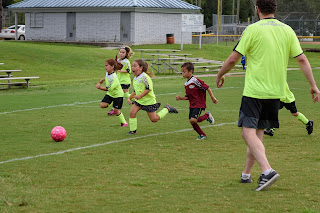 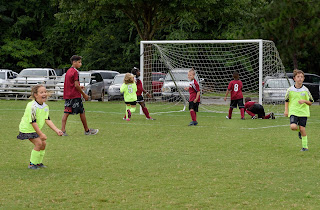 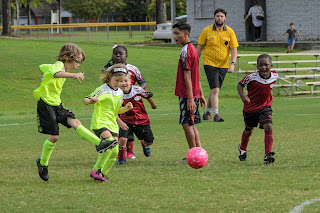 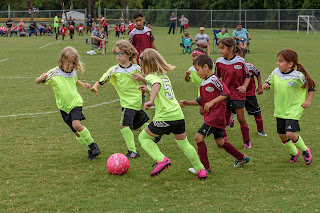 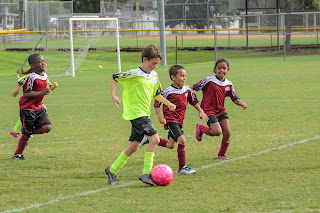 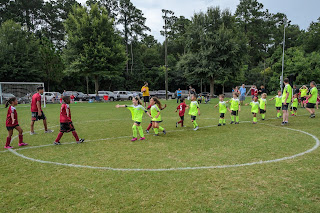 One more thing that made it extra great was the support our team had more the parents and also our TEAM SPONSORS!!! We were the only team in the league to have a sponsor and I'm so thankful we had them. They were Chris and Jami from C-Tech Water Solutions (check them out here for more info). Besides being legit the kindest people I have ever met, their daughter was one of players as well. I liked them from the very beginning. Their company bought equipment for the team, brought snacks/drinks to practices, paid for every kid's trophy and meal at the end-of-season-banquet. I needed some extra eyes on the field during practice and had to miss one game at the very beginning of the season, so I asked Chris if he minded being assistant coach and filling in for me that game as well.  BEST. DECISION. EVER. Coach Chris was amazing. I freaking love that guy. (Probably not as much as the kids though!) He was always smiling and eager to help. Truthfully, I think Olive liked him more than me. Hahaha. 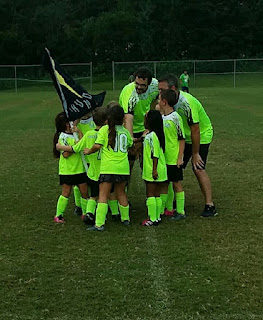 Also, Coach Chris came up with our official team slogan
"FEEL THE BOOM!"

Like I said earlier our team record was 3-2-2, but what I didn't say is that didn't count our last game. Right before our last match of the season, we figured out the other team didn't show up so they gave us the option of just playing ourselves. Since we had 8 players that game, we just did 4 on 4. I took half and Coach Chris took half. That "game against ourselves" was probably my favorite moment of soccer I've ever experienced in my life. I think it was 40 minutes of straight laughter from the entire team, sideline of parents, and the coaches. The very last quarter of that game, we did coaches vs players. It was just pure, wholesome joy on the field. It topped our season off with just the best experience ever for everyone involved. 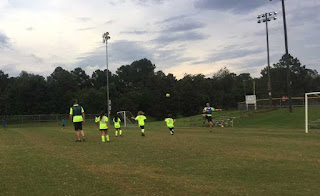 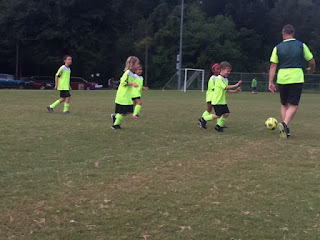 We had our team banquet at a local pizza place/arcade (shout-out to our team mom for organizing that and the snack schedule for each game!!!) Each kid got a trophy (courtesy of C-Tech) and an award from Coach Seth. The awards were super silly and fun. 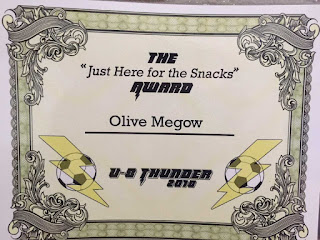 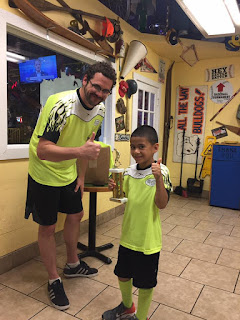 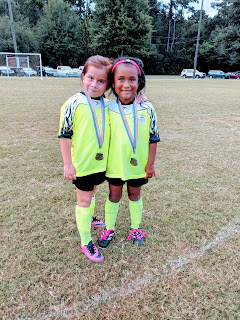 Seriously though, aren't these two just so cute :)

I would love to keep coaching every season in the future; however, time just doesn't permit it. One day when my kids are grown and gone, I'm just going to be a little kid soccer coach each season. It's really such a fulfilling experience that I think everyone should try at least once. 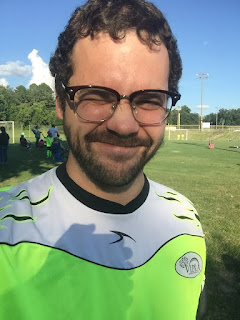 Be Blessed, Be a Blessing, and GO THUNDER!!
"Coach Seth"
Posted by Seth Megow at 6:10 PM