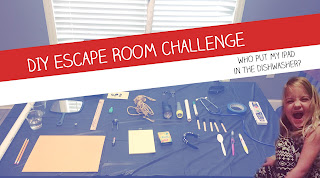 Titus wanted a Escape Room/Spy Party for his birthday. Since I didn't really find anything escape room wise skill wise for his age around us, I decided to kinda build one from scratch. I have to say it was mega fun to plan, organize, and run. It was such a hit that I've actually done it twice since then. I did it one for Sarah's kids when I visited and got to know them, and the last time was for my girls at the house (since they weren't at Titus's party).

So first off, I really couldn't find much online about building an escape room for kids. Mostly, it was just things you could buy to make one for adults. So that kinda forced me to really make it DIY. My main idea was to spread the escape room around the entire house. I broke it up over various rooms, which allowed me to give each room it's own challenge for the kids. Also, I didn't think little kids would want to stay in one room for that long, so this gave the chance to move throughout the house as they progress from room to room. Also, that way I could think of fun mini challenges for them without making it super hard. I'll put little videos of each of the rooms below, but I'll give a little explanation of each of the rooms:

2) A room full of bombs (balloons) they needed to diffuse (pop). Some of the bombs had secret puzzle pieces inside they had to assemble to find the a clue

3) A room where they had to figure out they needed to complete a painting. As they began to paint, a secret message began to appear on the paper which told them their next clue

4) A room that was only a cassette recorder that said "Play Me". Once they played the tape, it was weird sounding audio. So they needed to figure out it was actually audio in reverse and use a tool provided to play it backwards (and therefore hear the clue correctly)

5) A room full of a hidden pieces of blank paper. However, one they figured out they needed the blacklight flashlight to see a message on each of the notes, they could solve it and find that room's clue.

Once they finished completing all of the rooms, they put all of the clues collected to open the locked treasure chest that they found at the very beginning of the game.

After planning this, I realized how easy it would be to host one if provided with instructions and a list of supplies. Actually, I started this post by explaining and giving links to download all of the stuff  I designed to throw your own, but explaining the setup it was a little harder over a blog post than I thought. So I kinda scrapped that idea and decided just to show a basic overview of what it was like. However, I have that instruction post about half way done. If anyone really wants to throw one of the escape room parties, just let me know and I'll finish it and publish it.

The very first thing the kids saw was a giant table filled with various tools/equipment. I really didn't give them much instruction besides telling them to look for the note which would get them started. Mr. E (The host... Get it Mr. E... like Mystery. hahahaha) explained in the letter, they won't need much of these objects to solve the rooms. I just set out a bunch of random stuff to throw them off. It was fun finding all of the extra "tools" that they didn't end up needing. 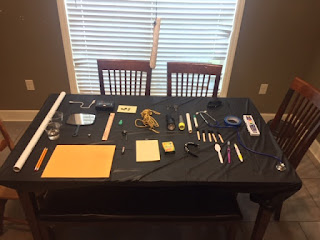 So here's the first note they got (It was hanging on a string to make it easy to find). 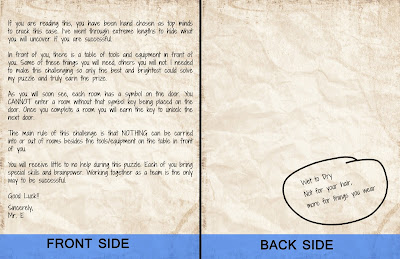 The first key matched the keyhole on our guest bathroom door. The instructions for this room read:

"I was hoping to give you an easier clue for this room but I didn’t have time. Right when I was in the middle of taking a hot bath someone brought into my house and tried to steal my mystery box! Since the bathroom was full of steam, I did not have many ways to write you a clue. I hope you can find it.
-Mr. E"

During all three of the times I did this one for kids, they needed a little help to figure out that they needed to recreate the room being full of steam so they could see the letter clue hidden in the room. However, once they figured it out and watched the steam make the letter appear on the mirror, they always think its so neat.

The next key matched the keyhole on the bomb diffusing (balloon popping) room *Titus wanted it to be part spy party, hence the bombs. hahaha. The instructions for this room read:

"In this room, you will be diffusing bombs I have set as traps for any other people attempting to discover the contents of my treasure. A few of these bombs MIGHT contain clues, so pay attention while you are diffusing them.
-Mr. E"

I designed this room to be pure FUN! There wasn't much of a challenge element to it. But walking in with toothpicks and seeing 100 balloons to be popped is just so much fun as a child (and adult to be honest). They LOVED this one every time! I hid little puzzle pieces in a few of the balloons for them to assemble. I rolled them up so they wouldn't be flat; therefore I would take all four of them holding a piece to make it work. Little ways to incorporate teamwork like that are my favorite.

The next room was a little tricky. The instructions on the door were:

"In this room, I’ve hidden the letter you seek as three different pieces. They will be HARD to find without a special hint.

Also, be careful for my painting on the easel. I really wish someone would finish it for me…
-Mr. E"

To be honest, I think this little challenge was my favorite. They really had to read the room instructions and figure out they needed to finish the painting. Also because it comes to life right before their eyes as they paint. It was so super easy to setup. Just write down something with a white crayon on a white piece of paper. Then as they paint over it with watercolors, it "magically" appears. :D After they finished the painting, they saw the clue was "Captain Underpants". So they looked in the room to find 3 Captain Underpants books with pieces of the letter inside.

The next room was really fun to plan. The instructions for this room were:

Remember, nothing can enter or leave this room besides tools and equipment you were provided at the table.
-Mr. E"

I love showing my kids older technology, so this one incorporated a Walkman cassette player. When they walked in, all they saw was the Walkman and a note that said "play me". When they played it, the audio was just a weird backwards sounding audio message. They had to go back to their equipment table, and figure out they need to use the iPad to play the message in reverse to hear it correctly. I really enjoyed making that one.

This is the audio that played on the cassette player

Picture of the iPad screen on the equipment table 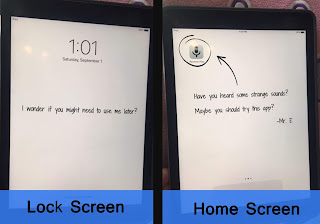 Video of them figuring it out!

Each time this was probably the favorite room. It's why I saved it for last each time. This was the instructions for the door:

"Once you successfully read the message exactly as it is written to your guide (Mr. Seth), you will be allowed to enter.

Again, you CANNOT enter this room until you do this.
-Mr. E"

I wrote that said "Lightswitch" with a highlighter on a yellow piece of paper and taped that to the door. It's basically impossible to read unless they used the right piece of tool (the blacklight flashlight). They couldn't enter this last room until they read me the note on the door. I did this to make sure they could do the room successfully and not mess up the order of the notes by randomly looking around without being able to read them. The tried a few different tools, but once they figured out that this note was only readable by blacklight, they were allowed to enter. Then it was just a series of them running around the move from note to note "Look in the box, finds a note that says "Look under the mattress, etc."

It was so fast paced and exciting for them! I loved watching them figure it out.

So by now, they had all of the letters and had been making notes while they went through so they could remember the correct order. It was time to unlock the treasure they found at the very beginning!!!

I thought it would be fun to do a different type of prize this time (normally it's little pieces of candy, trinkets, etc.) But this time, I made four different prizes and they randomly picked each one. It was also fun because they were in little slide out envelopes, which made it fun to open for them.

Stevie won: "Pick the restaurant next time we go out to eat"
Neela won: "Gets a piece of candy next time we go to the store"
Titus won: "A get out of cleaning the house pass"
Olive won: "An extra hour of alone time with dad"

It really was so fun to do it each time! And again, if anyone wants to host one of these, please let me know and I'll finish the instructions/downloads post. You'd probably have to spend like $30 to make it just like this one, but you could always change or mix it up to however you'd like!

Be Blessed and Be a Blessing,
Seth
Posted by Seth Megow at 6:52 PM