*Disclaimer- there’s some adult humor. So again, if you might be offended please skip over this post or at least until you see pictures of the kids painting J *

The kids have been itching to go to Hobby Lobby and do some kind of craft. Side note: The Megow kids LOVE Hobby Lobby. It’s their favorite place. I didn’t really have any idea of what we were going to do so we were just walking around. Now one thing I’ve learned how to do (reasonably well) is to kind of carry on multiple conversations with individual or groups of my kids. Each of the kids were looking and talking about different things we should buy or make. Neela however was hung up on talking about some movie she wanted to see. It’s a new Pixar movie called “The Good Dinosaur”. Her and I happened to see a trailer for it on the computer one day and she’s dying to watch it. 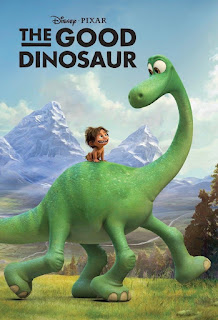 Neela for some reason is convinced the little boy is naked and thinks it’s just the funniest thing. (My kids are pretty innocent when it comes to things like that. I like keeping their innocence as long as possible). Anyways, we were all walking around Hobby Lobby for some time and finally found the project we wanted to do. The kids wanted to get little treasure boxes and paint them. They are called “private boxes” (we had them growing up too). 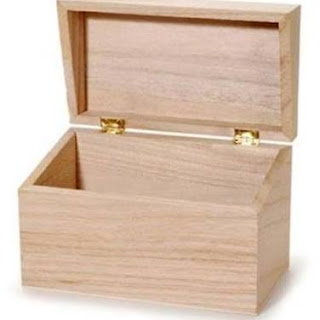 They had quite a few styles to choose from. It was really fun letting them pick.

Pretty much, you can’t open up anyone’s else private box. It’s just a little way for the kids to be able to keep little things away from their siblings. The isle was kind of crowded, but eventually we got to where all of the little wooden boxes were. They had quite a few to pick from and each design was about $2-3, so I let the kids pick out the box they wanted. Stevie picked out hers. Titus found the one he liked. Olive chose one as well .However, Neela wasn’t too interested in a box and instead said (quite loudly) “Dad, I want to watch that movie with the naked boy. The one you showed me on the computer.” The two older ladies beside me, literally stopped in the middle of their conversation and gave me “you’re going to burn in hell” looks. Now looking back my reaction might not have been the best, but in the moment it was just what came out. I leaned over close to the ladies and whispered so the kids couldn’t hear me. “Don’t worry. She’s not talking about child pornography or anything sexual involving naked boys. She just wants to watch a dinosaur cartoon.” The two older classic southern belle women quickly grabbed their gold colored handbags, fastened their red hats, and marched to another isle. HAHAHAHAHAHA!!! Not one of my finer moments in defending my children’s behavior.

I really wasn’t feeling well. I was really, really tired. I shortly found out after all of this I has strep (Getting better now. Thank Jesus for antibiotics).Anyways, the kids really wanted to do decorate their private boxes so we did. It was really fun. 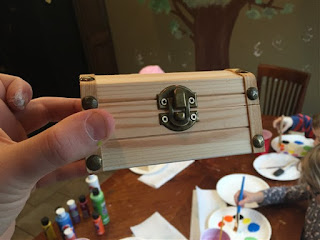 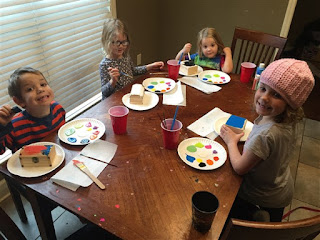 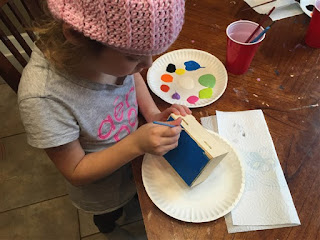 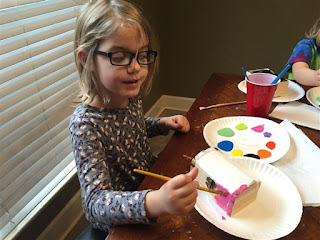 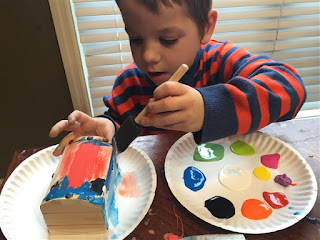 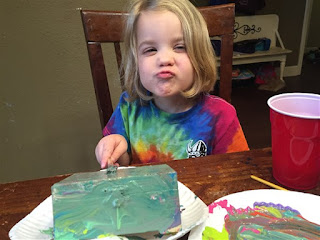 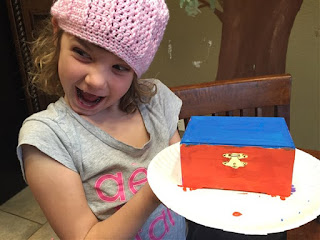 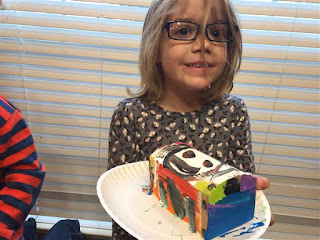 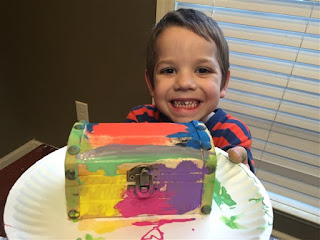 I think Titus likes his "privacy" more than anyone.
According to him, "I'm going to put so much candy in this thing." 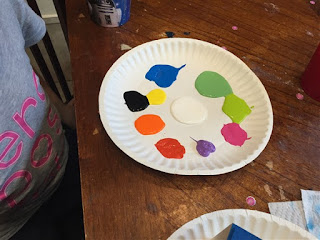 This was literally Stevie's paint plate AFTER she finished.
She is very detail oriented and took great care in washing and drying her brush after using a new color 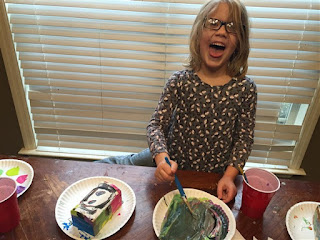 Neela on the other hand takes a different approach to keeping her paint organized. ;)

Now here comes my mental breakdown. After everyone was done with their boxes, I gave everyone dinner & a snack and let them play or watch a show. I had to finish work and it was due that day, so I really needed about an hour to myself to sit down and concentrate. Normally, my kids are really good about this. So I went to my little home office desk and finished up what I needed to do. I probably worked alone in my room for about 45 minutes. I came out to find out that Olive has gotten out all of the paint and proceeded to dump. it. everywhere. All over the table, the floors, baseboards, window blinds, etc. She had also covered her hands with paint and painted the walls of my house. To make matters worse, both Stevie and Neela were playing in the paint as well. Not as messy as their little sister, but for sure not in a clean way. They definitely knew better. 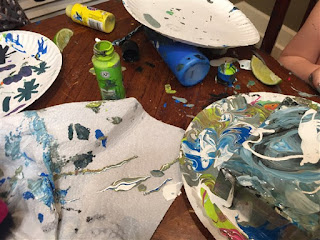 I didn’t really take pictures of the complete damage.
But here’s a quick snapshot I took before I cleaned the table.
And yes, they decided to use limes to paint with as well.

At first, I was really trying to keep it together. I gave everyone walmart bags, paper towels, wash cloths, and cleaning spray. Apparently, mountains of wet paint are beyond cleaning power of my children because they just seemed to spread it everywhere (walls included). I pretty much lost my cool and sent everyone involved to bed. I wish I could say I didn’t yell, but clearly that wasn’t the case. I was fuming mad. I’m trying to get my house ready to sell. Before sending them to bed, I strongly gave an intense diatribe about how hard dad works to keep things clean and how mad I was. I really was furious; seeing paint smeared everywhere in the house just made me so agitated. I stayed up about two hours and cleaned it all up. Well, about the best I could. I think the reason, I shared that story is I felt so bad about it later that night. I might have been the 102 fever, but really I'm sure it was an overreaction about the paint, but I didn’t sleep a wink that night. I hate when I lose my temper like that. I mean I absolutely hate it.

I guess the reason I shared that little story about me losing my cool is that I think everyone does from time to time. It’s not acceptable nor positive, however, it is human. We all overreact from time to time. The next morning all of the girls climbed in my bed and we all apologized. Kids are so quick to forgive; I love that about children. It’s something I am trying to learn from my kids J