So Olive's 5th birthday was last Saturday. Her party I think had my favorite activity that we've ever done for a Megow party, so I wanted to share :) I got the idea a few months ago at work. I was just sitting at my desk working and I started to think back to when I was a kid. Back then, if you didn't feel good, you got to stay home and watch Price is Right. Then I started thinking about Price is Right and my favorite game. It was called "Punch A Bunch". Basically, the player got to punch a few little mystery containers and win whatever was inside. 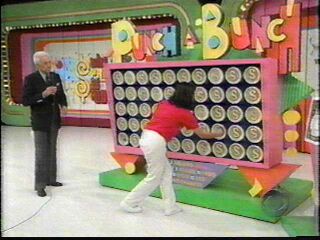 The best Price is Right game ever!!!

Then suddenly I thought that would be the neatest birthday party game. Pinatas and other party games had become stale, so this would be perfect :D

I looked online for ideas and found a few that were cool, but nothing that allowed me what I envisioned in my head. Most of the one's online required way too much work and tools (hot glue guns, elmer's glue, staples, double sided tape, etc.). Really they were just too "cutesy" and not really as fun/functional as I had hoped. Most of these little pintrest tutorials seemed like they would take forever and only result in about 10-15 prize punches. I wanted kids at the party to have multiple attempts to punch for a prize. So I took a few different elements I saw online and some of my own ideas and mapped out a plan. Then I started it about 9pm the night before. (So yes, this is all very doable by one person the night before the party. Just be prepared to stay up a little bit. hahaha)

I don't really like to spend a ton of money of things if I can help it. I'm really big on maximizing a budget. It not only saves me money, but makes things a bit more of a challenge and gets my thinking outside the box. So just remember that when reading this. 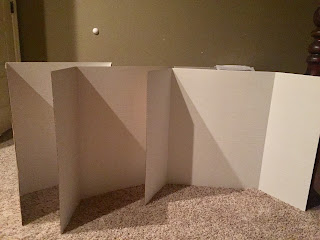 2) Remember I wanted to have a TON of punch prize holes for the kids, so first thing I did was to map out where I wanted all of my holes to go. I took one of the poster boards and made a little template of how I wanted the cups to organized. 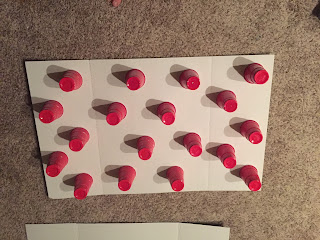 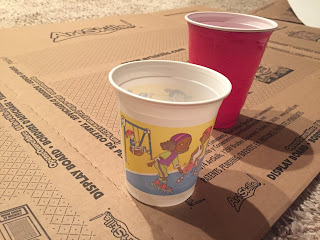 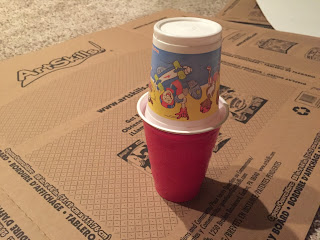 4) Once I found the cup, I started tracing outlines of the small cup in the pattern that I laid out before. 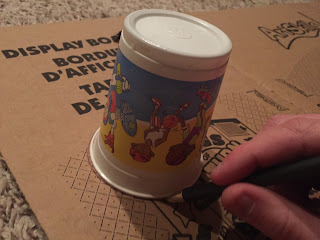 5) Then I cut those traces out with my razor knife. 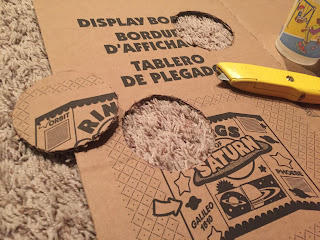 Helpful hint:
So to save time on cutting the other two boards.
I just overlaid my completed first one and used it as a template for cutting the holes. 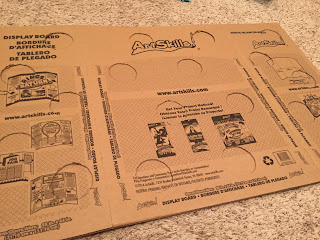 That was the most time consuming part.
Honestly, I probably didn't have to do that many holes, but I'm glad I did.
Every kid got to punch a prize quite a few times,
and still wanted to do it again after they had all been punched.

6) Once all of my holes were cut. I just duct taped all of the poster boards together to make one big board.

7) Now the fun part. Filling the cups with prizes and candy. So I set out 54 solo cups (since I had that many holes) and started to fill them up. I did half of the cups with candy and the other half prizes. For the candy, I went and bought the 70% off valentine's day candy. So in total that cost me like $3 for all of it. For the prizes, I went to the dollar store to buy a few cheap packs of party prizes (slinkys, bouncy balls, stickers, etc) but I also filled some with weird stuff (like dog treats, ramen noodles, an unused bandaid, etc.). So I filled up all of the cups and then sealed the top of them with a piece of tissue paper and a small rubber band. 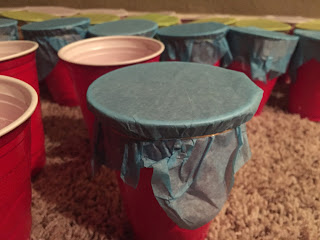 8) For the last step, I stuck the cups through the front side of the board. So when kids punched them they would stay put (for the most part, hahaha) 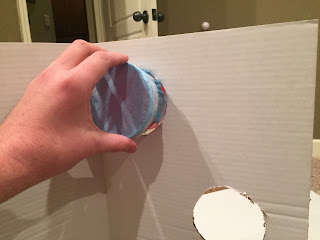 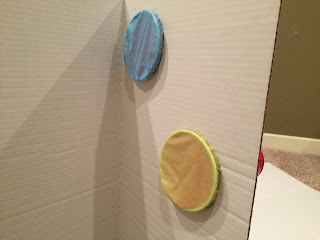 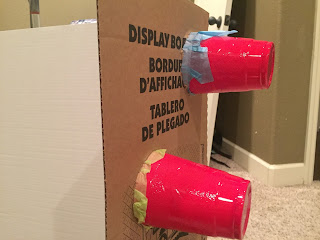 8) *Optional*  I really could have been done. My plan was to just put the cups in, put some stickers on the fronts of the board, and be done. However, the plain white poster board fronts seemed so boring, so I scoured the house and found a bunch of random paints. So I Jackson Pollocked the boards and let it dry over night. The next morning I was pretty pleased with the results 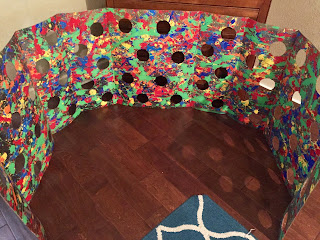 9) *Optional* Then after I put all of the cups in, I thought it would be better if it were lifted off of the floor a little bit, so I mounted it on wood blocks and covered them with left over tissue paper. Then right before the kids lined up to start, I passed out little gift bags I found just sitting in my pantry from I think Neela's 3rd birthday party. hahaha 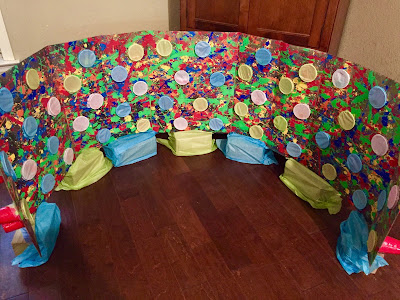 So I was kinda nervous to see how the kids at the party would react. I've found that sometimes if I put alot of planning into something and am REALLY pumped about it, it doesn't mean they will be... hahahaha.  But in the end, they all really enjoyed it. 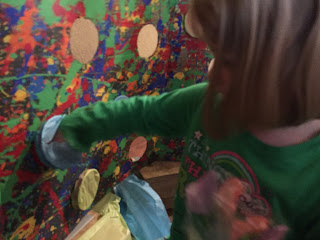 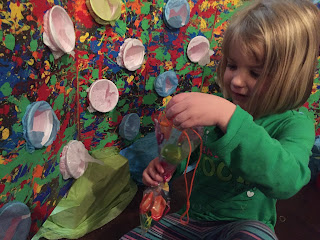 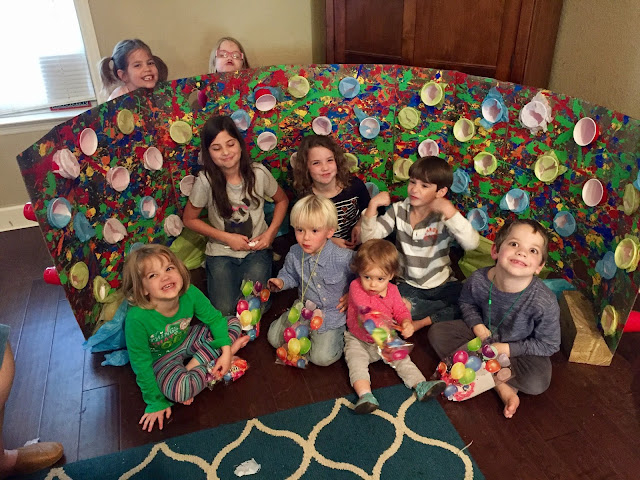 Overall, it was a super fun, simple party. Also, to make the party even more fun, my mom made something called a "pinata cake". Which was super cool. Instead of trying to explain it, I'll just show you the video of what it was. Olive loved it. :)

Be Blessed and Be a Blessing,
Seth
Posted by Seth Megow at 2:26 PM