What advice would I give younger me? 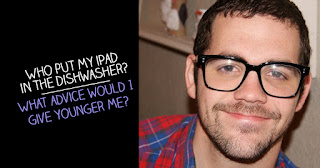 For some reason, the idea of "If you could go back in time, what advice would you give yourself?" keeps popping up in my head. Lately, I've been hearing it in conversations (in person and on the radio), in songs, books, and on tv shows. So that's really made me stop and think of what I would tell myself if I could go back?

At first, I thought about going back to my high school years when I was just a big band geek with polyester shirts and a big ole' afro. Hahahaha. I had absolutely no self confidence, but also thought I was always right about everything. If a topic came up in conversation, people needed to hear what I had to say because it was clearly the right answer. ;) I could tell myself to just be confident in who I am. It's ok to be weird and not to try so hard to stand out of the crowd. Maybe that if I would just talk to new people, I wouldn't have to be so shy around strangers. People might actually enjoy being around me.

Then I moved onto thinking about when Crissy and I were first married. I could go back and tell myself to quit worrying so much about the future and to enjoy the moment. I was constantly working for our "next step in life". We needed to both graduate college, get good jobs, buy a house, and have kids. Everyday seemed to be just another notch on the belt of setting up our dream lives. I thought about telling 20 year old Seth that he needs to maybe enjoy the season of life he is in. That he's going to miss being broke, living in an apartment with six foot ceilings (I'm 6'2), and just living on love with his best friend. I could tell him to savor those moments.

Next, I moved onto when Crissy and I first started having kids. We had both graduated with our Masters and had three little ones. Our little family were renting a small little house near the college. I was so set on finding a career that made good money so I would be able to provide. Crissy had an excellent job with a lot of money; however, I didn't have the same outcome with my job search. I worked random jobs while I was constantly searching for "the job". I became so depressed when I was unable to find it. Crissy would constantly tell me to just enjoy the free time together that we were given in this season of our lives. Her job was very flexible and she made good money. So we made enough to get by and more importantly had so much time together, but I just couldn't accept the fact that I wasn't making enough for her to stay home full time with the kids. If I went back, I could tell myself to listen and enjoy these moments of being together as a family. Not to just constantly be a grump about not having this amazing job I always dreamt of having.

Finally, I thought on what I would say to myself about 5 years ago. This was probably the longest point of time I sit and wondered about. Having your best friend, wife, and mom of your kids walk out was the lowest point in my life. At first, I was constantly trying to fix everything. Monitoring bank statements, searching the house for clues to her newfound mystery life away from home, asking specific questions and demanding answers. I just couldn't believe it. I was heartbroken. Not only did she pretty much evaporate from my life, but there were these four little faces just staring up at me just as heartbroken and needing love. I could tell myself to lighten up. You can't change other people. That's up to God. However, you are in control of how you react to situations. I could say to myself that in the end, you'll be happier than you ever were before. And yes, you will get a divorce. And no, you won't have to keep fighting to have her back or even want to get back together. I could say not to worry so much about all of the custody stuff and financial strain that addiction causes you. In the end, it will all work out.

So, those were the thoughts that I kept juggling around in my head each time this question came up. Then, I remembered something my dad said a long time ago when someone asked him this question. It was a Father's Day church service and the pastor called up a few fathers to the stage. He asked them the question of "If you could go back and change one thing, what would it be?" He was hoping hearing older men talk about things they wished they did different would impact the younger men listening. I believe there was about 5 men called up. My dad was last in line. Each man before him gave these amazing insights on how they could fix mistakes they've made by doing "xyz". When it got to my dad, he talked a little while about various mistakes and things he'd wished he had done differently. But he ended by saying, even after all of that, I wouldn't change a thing. Because all of that made me who I am today. (My dad is so wise.)

After I started thinking about that, I realized that I really would hate the idea of giving my past self advice. Sure, there was so much room for improvement. But that's just the beauty of our journey isn't it?

-Being a nerdy kid who insisted on being ultra different, but all of that helped me find out who I was.

-Thinking back on how I rushed through sweet moments in the past has helped me realize to embrace each day as it comes. I don't want to look forward to tomorrow anymore. I want to enjoy right now.

-Going through a divorce and completely readjusting my entire life to be a single dad of four kids was hell on earth. But geez, the person that God has molded me into is someone I had always wanted to be when I was younger. Someone who is just full of joy.

So yeah. I would never want to change a thing about my past. Sure there are memories and things I still regret, but without them I wouldn't be where I am today. (laying on a bed covered in Chex Mix crumbs typing this blog post on a laptop with kool-aid finger prints on the screen) :D

Be Blessed and Be a Blessing,
Seth
Posted by Seth Megow at 10:03 PM