Stevie loves to write/draw/create/etc. Lately, she's been asking about putting something on the blog, and a few weeks ago, her and I found a story she wrote a little while back. We read it together, and I laughed so hard. I love her creativity in her writing. And of course, if I have the opportunity to showcase my kids then I'm going to brag about them until the sun comes up! :D We decided I would type up her story (exactly as it is written *cute misspellings and all*) since reading scanned pages can be kinda difficult for some. So we go... 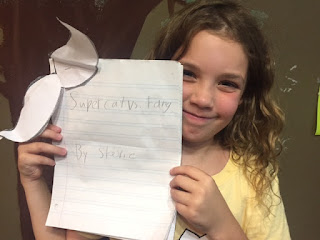 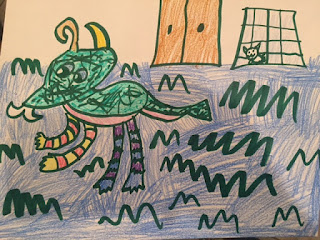 Then a really strong person got an ax and chopped the door down and 2 contries came to the dragon and they killed it. But the mustache remained with all 3 powers unharmed. Then they hid the mustache for 1,000 years in a chest but then a lonely alley cat was wondering around and saw the chest and used it's sharp nails to open the chest and felt the mustache. 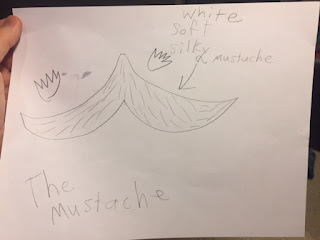 It felt but it was so powerful it stuck to his head and he earned all his powers but then he saw something. "What was that" he said to himself. Then he said, "Who are you?" Then he appeared from the shadows. It was... dun... dun... dun... the dog.

The dog said I have powers and you don't! Mwhahahahaha! You litttle alley cat with a mustache.

Then the dog said I need that powerful mustache. He did an evil grin and laghed again. Then the alley cat went home sadly thinking about how he was bullied. Feeling sad he came home and in a sad voice he said "hey mom."

His mom said "why are you feeling sad Whiskers?"

He told his mom the whole story his mom felt bad for him. His mom told him about the evil dogs.

She said "The evil dogs have been around since the dragon. When he was a baby pup but then he cried when the dragon got chopped with an ax. He's going to get revenge so he's gonna destroy all the people that were there then he earned a power because he loved the dragon so much. He's not nice he abanded his family because he stole a catsle. It was the dragon's catsle and he's looking for the one with the powerful item."

"Did you like it Whiskers?" said the mom with a happy face.

Then he went to an abanded shop to test his powers. The powers haven't been used in years so the fire heated up and the ice froze up and the cat rain added cats. Then the fire came out really fast out really fast and ice came right to his head and then the cat rain came and when he looked outside it was raining cats. So he tore off the mustache an the cat rain stopped and the fire was out. Lastly the ice melted. He never wanted to try that again. 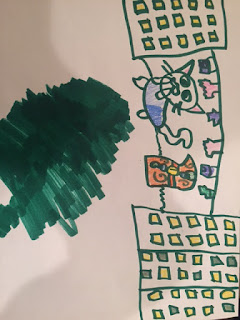 But then he saw the dog. He said, "I been watching this whole time."

"Now I will have your mustache." Said the dog.

Then Whiskers said, "call me super cat" and used ice on him.

Supercat said, "you have one power and I have 3!"

Fang used his physic powers to life him. Then Supercat had to do something

"So weird" he did it he sang a lullaby. "Rock a by uh sleep my little Fang."

Fang fell asleep. Then he awoke. And said "I just want your island!!" Then he ran into the shadows and broke the ice. Then supercat went to celebrate. He went to get a pizza. He told the worker the whole story. Then he got a free pizza. He said thanks. Then he saw some poor people so he gave them $20. He felt proud and walked home happily thinking about being rich and feeling like a superhero. Then told his mom they were both proud and went to go eat but then they saw the worker was Fang! 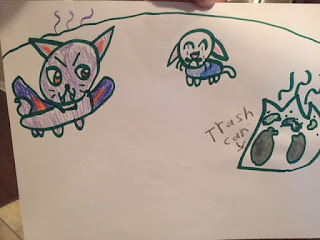 Supercat said "Fang, what are you doing here."

"Here to take money for the island." Then he flew into the shadows and told them all about Fang and then he saw they all have powers. Then we all used our powers and sent him to jail but he escaped and took my mustache....