1) Olive is currently only referring to herself in third person...as "Minnie Mouse"

- For example:  (both actual quotes for this week)
"Minnie Mouse isn't going to eat that". *pointing to green beans
or
"Minnie Mouse needs daddy to wipe her butt." 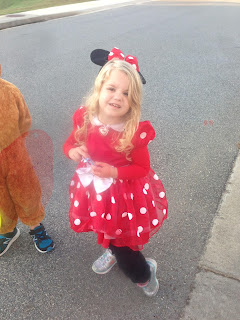 2) Before my Nana passed she got really into Facebook. However, it took her awhile to get the hang of it. You see how when you go into type a post it says in light gray "What's on your mind?

Well, I think she thought it was a part of the login process to Facebook because for a month when she first started, I would see this pop up on my newsfeed.

Hahahaha! I liked it everytime! I thought it was the cutest thing ever. After awhile, I went over there and showed her what she was doing and she busted out laughing. :D She was a jewel.

3) Today when I picked Neela up for school and asked how her day went, this was our conversation:

Neela - "Today I made up a worship song called 'My Heart Shines' "
Seth - "Really?! That's beautiful. Will you sing it?"
Neela - "Well, I couldn't finish because I wanted to eat some paper."

4) Recently, I did a mega cleaning/purging of the house. There were a lot of things that were getting worn, broken, or just plain gross. So spend a few days packing my garage full of that stuff to clean out the house. This is what my living room ended up looking like... 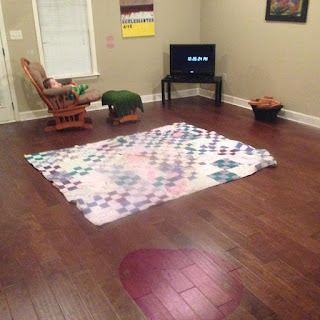 I began the search for a new couch, rug, etc. to fill up the living room again. However, I noticed that when the living was somewhat empty, my kids would instinctively start to color, play, ride bikes, build blocks, etc instead of just plopping on the couch and watching a tv show. They didn't really watch a ton of tv anyways, but now it seems like it's hardly ever on. Normally, it's just during a family movie. We'll all just get pillows, lay on the quilt together, and watch it together. Plus it's like a giant playroom with a ton of free space. I know it sounds weird, but I think I'll keep it like this for awhile and see how it goes. For the meantime, I think everyone is enjoying it.

5) Titus has some warts on him. I have walked on him a few times talking to himself about them. "Awww... look at these cute little babies. I love you warts." I keep trying to talk him into letting me remove them; however, I have learned he is extremely protective of his wart friends.

7) Animal Updates: Today we met a baby squirrel who hasn't even opened his eyes yet. It was pretty much Neela's dream. She hasn't stopped talking about it. Actually at this very moment, she is building a "squirrel catcher". 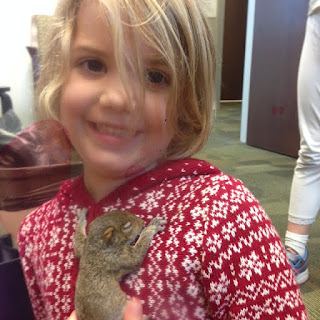 My kids were in LOVE!

Another Animal Update: Tomorrow someone is bringing us this to keep ... hahaha. Neela is going to flip out. Lately, she's been asking for an "real creature, the kind no one else wants" (which means something weird) to take care of. 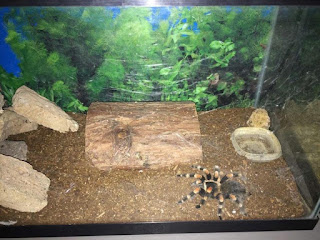 His name is Pinky

8) I recently added "topics" to the blog so readers can easily locate various posts by topic. I was pleasantly surprised to find that I mention cats in about 1 out of every 4 posts. That junk is hilarious to me.

9) Speaking of cats, I've designed a shirt for the blog and am going to start selling them soon. Just going to sell them for cost. I just don't like the idea of making money off the blog. That's why I never plan placing advertisements or endorsements on my page. Not that there's anything wrong with it. I have considered it (you can make a lot of money from ads on a blog). I kinda view it like my little way to brighten my little corner of the world. Anyways, back to the shirts. Here's what I'm thinking they might look like. I'm going to be giving some away for free once they are final and printed :) 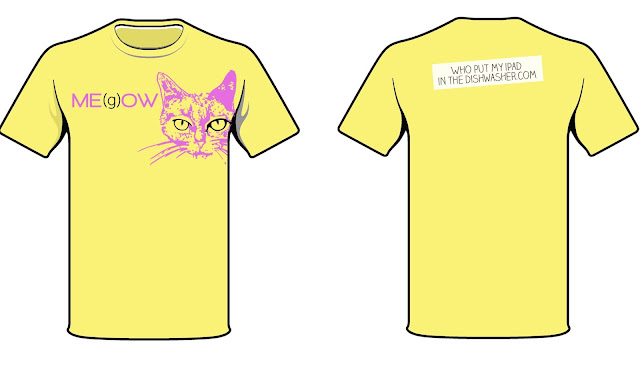 10) The other day I was working at my desk while the kids were just playing around the house. (I do a lot of work from home). Anyways, it works out pretty well. I just keep my door shut and I can kind of listen to them running around and playing. However, this day I heard a looonngg period of silence (never good) followed by extreme laughter and giggles (even worse). So I walk into the girls room find Titus wearing only his underwear and spiderman mask sitting in a toy bin filled with red water. He was spinning in circles in the toy bin, while Neela had the entire 4 lb. bag of sugar and was dumping it over his head. Apparently, this was their method of making Kool-Aid. They filled the tub with water and Kool-Aid powder. Titus was mixing it up while Neela was pouring in the sugar. hahaha.(ps. they got in trouble).