It's that time of year. Time to host the annual Southland Christmas party. My job for this event is to write, organize, and entertain people for about an hour. I love the challenge of this and look forward to it every year.

Seth's Note: I just kind of skimmed over this post after I finished it. I never proofread as you can clearly tell ;) Anyways, this post kind of sounded like I think I am the funniest person on the planet. Obviously, that's not true. Most of all my friends are way funnier than me. This is just my take on humor and a listing of past skits and stuff that I organized for the church Christmas party :)

I kind of view my personal assignment on earth to be 1) An encourager and 2) To make people smile and laugh. It's something I take pride in and normally it comes naturally. I have a wide variety of friends with a variety of different senses of humor. I can tell you the most challenging form of humor to craft is definitely "church humor". We've all heard and seen countless lame and not funny "Christian comedians" (there are very funny ones, just to throw that out there).  Sometimes, the stuff in church that is intended to be funny produces just a chuckle if anything. It's a really hard thing to write stuff that won't (seriously) offend the church crowd, isn't material we haven't heard before, and is actually funny and entertaining. I really don't view myself as a super funny guy, but I do think I have learned the art of crafting "church humor". Maybe I put too much thought into it, but because of the mixed audience age and varying moral standards of the church it's a fine line of balancing between dull and a little-too-much. 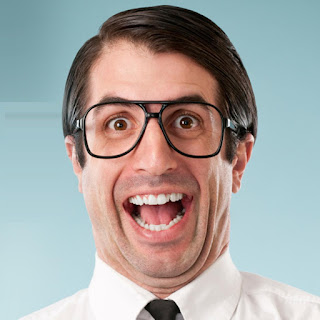 Church skits are my favorite.

Now back to the Southland Christmas Party. I love my church because they pretty much have trusted me from the very beginning to do whatever I felt would be funny and appropriate for the crowd. Every year, I always think "I'm going to get a call about this tomorrow" or "I wonder how many emails this joke will get me". So I just keep on keeping on. hahaha

This will be the fifth year of hosting and we am starting to plan out jokes, skits, videos that I want to do. Pretty much, it's just an hour of mostly me standing up there acting like a goofball. A lot of it is off the cuff and just saying whatever pops into my head. Last year, I remember thinking one of my set of jokes on the car ride over :) I doubt my pastors really want to hear that. Things are normally pretty planned out in advance.

Anyways, the reason I wanted to do this post is because last night I was just looking over stuff we have done over the years just to get me excited and to make sure we won't repeat any jokes or themes that have been presented in the past. Let's go over a few of the past years things...

1) "The Entrance"
I always thought it was fun kicking off the night with a bang. So I have always enjoyed doing a dramatic and somewhat ludicrous entrance just to prepare people for the hour of nonsense they have agreed endure by attending the Christmas party.

2011- I busted into the sanctuary in my tuxedo with tails (keepin' it classy) waving the flag while simultaneously blaring the epic song by Europe "The Final Countdown". It was fun :) 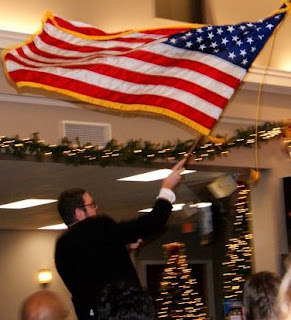 2012- We made a little introduction video welcoming everyone to the party. At the end of the video, it said that I hid a $100 dollar bill under the seat. So while people were excitedly looking under their seat, I got carried in on a stretcher throwing out rose petals. Then the video said there was no $100. Pure weirdness and nonsense. :) 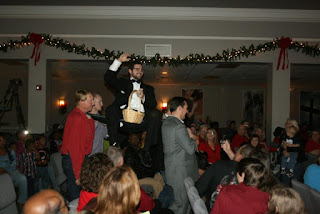 2013- The room was quiet and suddenly the Mr. Rogers' theme song came on and I walked in wearing a cardigan and sneakers singing the song. On stage I changed into my dress shoes and dress coat. Sorry no picture.

2014- This year instead of a dramatic entrance me and my friend Justin sang a song to kick off the event. It was really funny. 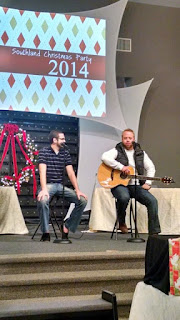 Props to Justin on this skit. He planned it, did most of the vocals, and played guitar.
My only contribution was randomly squawking like an eagle.

2) Videos
I really like creating videos for this event. There's a few reasons. I plan most of this stuff on my own and that way I can make these videos and edit late at night. I was looking over and have about 12 of these things, but I wanted to share some of my favorites with you. Hopefully, they can make you laugh :)


This was a "Behind the Scenes" video on how the Christmas party is planned, catered, and setup.
Sorry for the poor sound quality. I didn't have the best equipment.

We like to do a "Kids Christmas". This was very first one from 2011.
It's the worst quality video/audio (bad equipment and no access to good software)
Mostly, I wanted to share because of how cute my and my friends kids were.
(Side note: I LOSE it every time Neela trips over the chair :D haha)

I also like to do fake PSA's.
We've done a few, so here's one for your viewing pleasure

3) Awards
We started switching the format up last year and phased out the awards. They were getting cliche and old hat. However, we did them the first few years and they were alot of fun.  I think I, along with everyone else, enjoyed them so much because they were a subtle, lighthearted way of poking fun with people in the church. Some were sweet and some were funny. Here's a list of some of my favorites:

-Always smiling
-Never smiling
-Sexiest beard
-Most likely to grab the mic during service
-Most likely to miss this event due to a hair appointment
-Scariest fingernails (this one went to a man :D )
-Most likely to wear embroidered jeans to church
and my person favorite
-The most likely to see a stray dog on the side of the road and take it home. After a few days, you find see a missing dog poster, so you call the number but the phone is disconnected
so you drive around town asking people if they know who
posted these missing dog signs. No one knows anything about the signs, so you just end up taking care of the dog Award 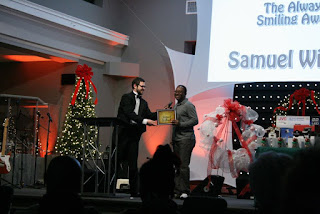 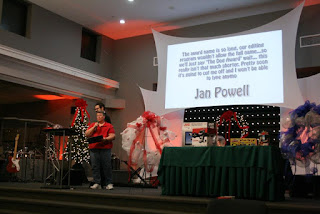 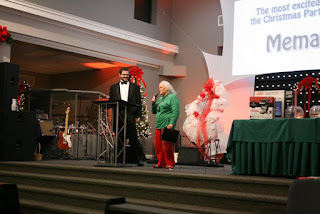 My best bud, Lyn Stalvey (Memaw), won
"Most Excited About the Christmas Party" three years in a row
Memaw loves the party ;)

4) Skits, Games, and Songs
There's always funny skits, games, and songs every year. Some of the ones we have done in the past we "Worst Present Ideas", some funny top ten lists, and my personal was a piano ballad I played and sung encouraging the church to buy bathroom air fresheners. Pretty much, I just picked out a few of my friends who I knew wouldn't mind and sang about how bad their poop always stunk before church. That song ended with Memaw dancing in her formal church dance robe spraying Lysol around the stage. (I'm a lover of low-brow).

Also, a local costume shop (Bouncin' Balloons and Costumes) donated mascot costumes every year for the kids enjoyment. We've had Mickey Mouse, Spiderman, The Grinch, Woody & Buzz, and quite a few others. (Side note: if you ever need a costume or cartoon character for a birthday party. They are the sweetest most giving people on the planet. Check them out here and support a local business that loves to give back to the community). We also do a yearly tradition of giving out bags of candy to the kids :) It's just fun 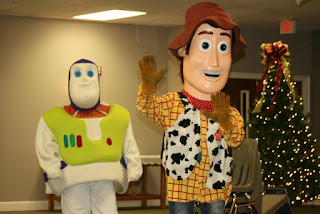 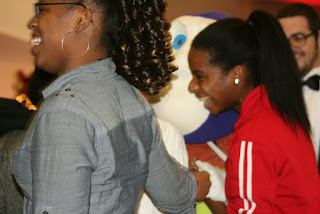 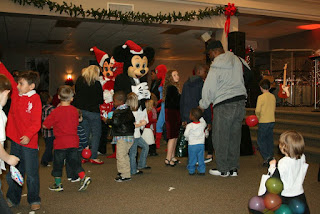 We also do big games some years. Last year, we did a newlywed game which was hilarious, but sometimes we do more Christmas themed things. It just depends on the year. 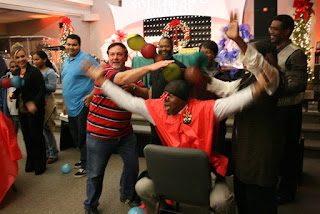 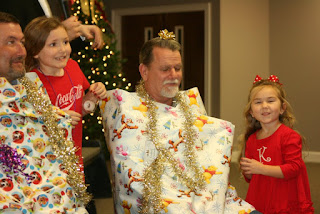 In conclusion, it's a fun party and a good chance to show that God DOES have a sense of humor :)
If you are a member or attend Southland, consider coming to the party. Who knows? This year I might just take my shirt off. 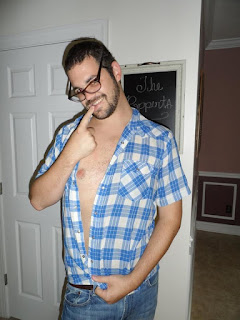