The Megow kids love animals. They have a plan to start hosting “animal birthday parties” at our house. Read more about that here. We have a few little critters in our house, so I wanted to talk about them and show them off.

She is a Mexican Red Knee and very docile. Someone was looking to find him a new home, when I mentioned it to the kids, they pretty much freaked out with excitement. It was love at first sight! They enjoy taking her out from time to time and letting her walk around the living room. Now before we started handling her, we watched and read a lot of movies and literature about having a pet tarantula. We learned when to see if she didn’t want to be bothered and how to pick her up. Mostly though, she stays in her tank and enjoys a steady diet of live crickets. Side note: Neela loves to pick her up and show her to older boys and watch them get scared. She’s so hilarious. 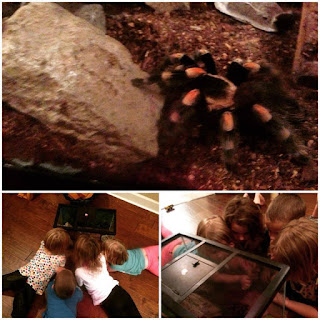 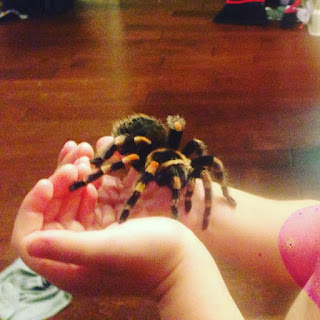 Jingle Bells was Neela’s Christmas present from my parents. Actually, he was a replacement bearded dragon named Alabama. (He was Neela’s best little friend. He passed a few months ago and she was so upset L. It was really hard on her, but she handled it well. I wrote a post about Alabama passing, read about it here) Anyways, my parents gave Neela money to go buy another. She loves him and likes to let him walk around the living room (not at the same time as Tiger Stripes). We have a little harness and leash for a bearded dragon that we used with Alabama. The kids can’t wait until he is full size and can go for walks. He loves to eat kale and live crickets/meal-worms. Side note: during the summer it’s surprisingly easy to catch your own crickets, but during the winter we usually just buy them from our local pet store. 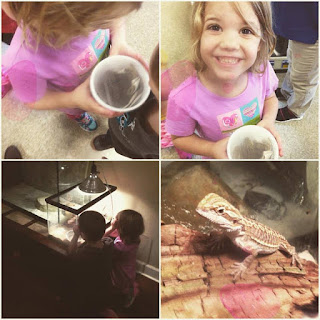 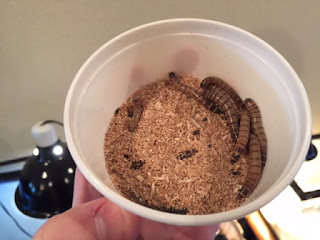 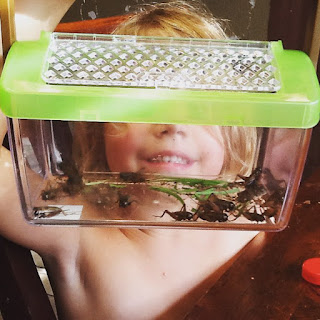 We were also given Tina. She is a Red Slider Turtle and might be my favorite pet. She loves to walk around outside in the grass; however during the winter its just too cold, so you guessed it. They love to let her walk around the living room. I think she’s my favorite because of her curiosity. Tina is constantly observing things from inside her tank. She will follow you with her eyes as you walk back and forth. She probably requires the most work and upkeep. To be honest, I will a little worried about the kids being about to do the upkeep and remembering to feed her twice a day. Not saying she would be neglected at all. I just figured it would be more work on my part. But the way they remember to care for her as been a pleasant surprise. Each morning before school, they count out 6 little turtle pellets and carefully drop them in one at a time and do the same thing before we eat dinner. They also are good about keeping her tank cleaning on a proper schedule. She has two little feeder fish in her tank; however, Tina has kind of bonded with them and they just all kind of swim around together. 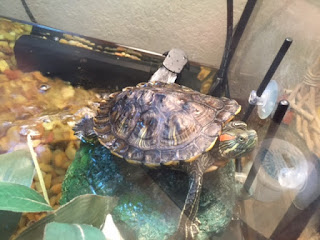 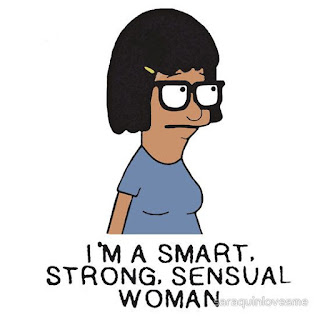 I like to assume that Tina's "spirit human" is Tina from Bob's Burgers.
It just feels right. hahaha

Which brings me to our final pet…

This morning started off like every Saturday morning would. I found Olive on the couch eating a handful of Cookie Crisp cereal. That would be cute except for one thing. We haven’t had Cookie Crisp cereal in our house for months. Hahaha. I promise my kids find the most random snacks ever in our house. I have no idea where they find this stuff. Once Stevie asked me if she could have a snack, I said sure. A few minutes later I walked into the kitchen to find her eating ice cream. I didn’t have any ice cream. Still to this day, I have no idea where it came from. After I gave Olive some real breakfast to eat, I walked to the back room to find this note taped to Titus’s door and laughter coming from inside. 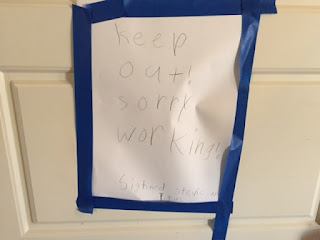 I peeked into find Titus and Stevie hiding under a clean pile of laundry making fart noises.
Nothing out of the ordinary there.

However, Neela remembered what made this a “special” Saturday. We was completely dressed and waiting by the door. Today was the day, we were going to adopt a dog. Last night, the kids made a list of all of the things our family was looking for in a rescue dog. They also drew some pictures of what they would like for it to look like. We took that paper with us to the Humane Society adoption event at our local Petsmart. 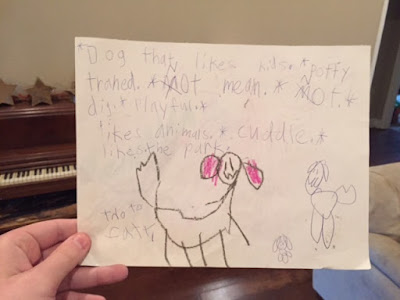 So after Neela’s strong encouragement, we all got dressed and headed out to look for our new family addition. Right when we walked in, they spotted a cute little dog and fell in love. I suggested we keep walking around and see all of the dogs they were available for adoption. 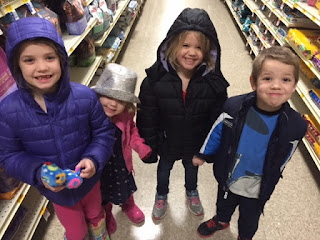 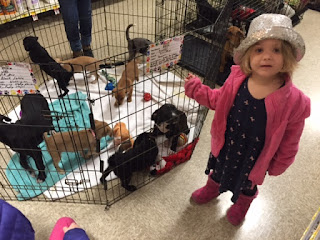 Looking at some puppies :) 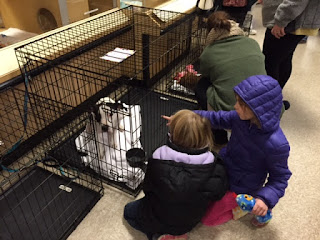 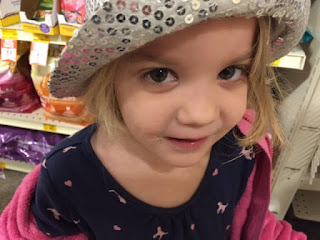 The workers were so friendly and there were a lot of people there adopting.
It was a great thing to take the kids to.

So we looked around for a little awhile, but after looking they ran back to the crate of the first little one they ran up to and just kind of laid on the cage. Hahahaha. So that’s the pet we adopted today. So for the first time to hit the internet, let me introduce “Madison Angel Megow”. The kids gave her the middle name J They like to call her Maddie. 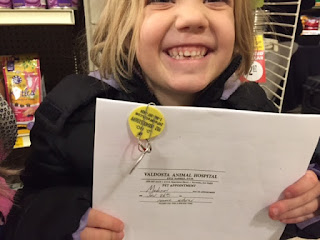 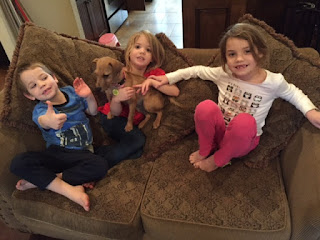 She is a two year old terrier mix 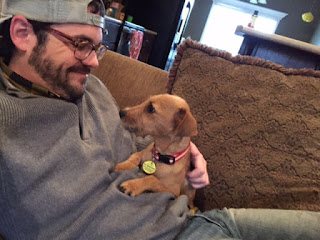 I'm a sucker for a terrier. hahaha

The Humane Society worker gave us some of her backstory. She was owned by a family for about two years and then had her first litter of puppies. Her first family gave away all of the puppies and then decided they didn’t want a dog anymore, so they gave her to the shelter. Of course, upon hearing that little story the kids became super attached. She seems to be adjusting quite well to the overabundance of attention and is quite interested in sniffing and watching the other little Megow critters. Don’t worry their tanks are secured and sturdy. J

The kids wanted to give her a bath, so we did that and they had a blast. After her bath, they all ran around outside in our backyard for about an hour until all just retiring to the couch for a Saturday afternoon nap. 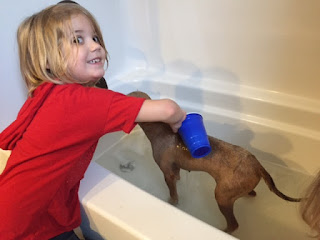 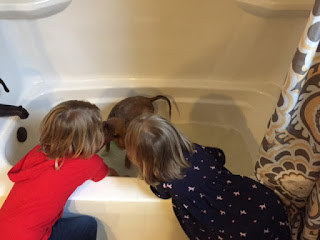 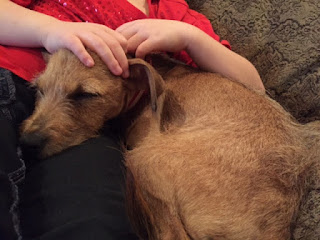 If anyone wants to come and meet any of our little critters, let me know and I’m sure the kids would love to take them out and show them to you. J

Be Blessed,
Seth
Posted by Seth Megow at 5:13 PM