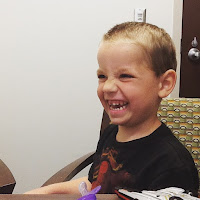 Well, it’s time to talk about talk about my best buddy. Titus Robert Megow is an energetic, caring, thoughtful, and focused little boy. He’s pretty much into “boy things” which I love because I was the same way. Also, he has a big imagination which makes him really easy to play with and be entertained. For being such a “whack dad in his jewels with his power ranger sword” type of boy, he is surprisingly sweet and sensitive.  He loves to compliment people and seeing them smile. I promise if you are around him for more than a few hours, he will look at you in the eyes and say something like “I like your hair. It’s pretty” or “You have cool shoes. I bet you can run really fast.” He enjoys showering people with compliments, so it very easy to see what his love language is. Every night, he loves to sit in my lap and tell him that I’m proud of him. He’ll  always ask “Why?” with a big smile. I don’t really view it as fishing for compliments, he just really loves hearing his dad say that I notice all the little kind and helpful things he does and remember them enough to say I’m proud of him for doing them. 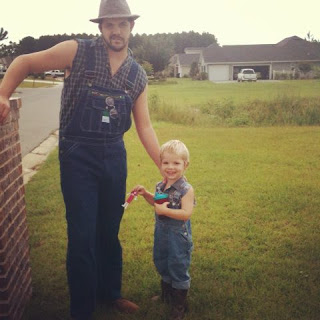 We went to a monster truck show.
So we dressed to blend in ;) 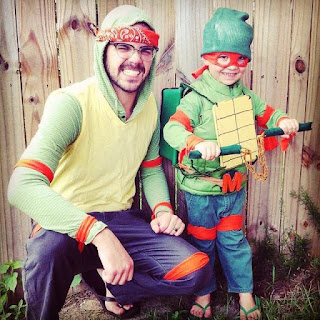 We like to dress up together.
This was when we went to go see Ninja Turtles in the theater.
He didn't watch the movie. Mostly he ran up and down the isles swinging his nun-chunks

One thing about Titus is this kid is already kind of girl crazy. It started at an extremely early age with him. When he was like 2 years old, I remember he would cry if the nurse wasn’t pretty or a man came in at the doctor’s office. On his first day of school this year I asked him if he’s excited about school. The only thing he said was, “The only thing I care about is that my teacher is pretty.” J We walked in and looked at his teacher and whispered in my ear “Whew. She’s pretty.” He has a big crush on one of the girls in his class. He has known her for a few years and is constantly talking about her. Last week him and I were talking and he said he wanted to do something for this little girl. I asked why, and he responded with “Dad, have you SEEN this girl?” Hahaha.

Another fun fact about Titus is that this kid has a major sweet tooth and I promise he has a sixth sense for finding sugar.Titus can sniff out sugar anywhere you hide it. We are working on always asking before you eat sweets, but for awhile when he was younger, he was a candy junky. This a true story. One time when the kids were asleep I had some candy for a friends birthday party and I hid it on top of the washing machine under a pile of clothes. So I finished up a few things and went to bed. I woke up at 6am to find him under his bed eating the candy. So let’s retrace this, he woke up and searched the house top to bottom. It was then I figured out Titus had a routine of waking up from like 3-4am to start his nightly search for hidden candy. Apparently, since he looked in the laundry room under a pile of clothes, his nightly quest was pretty detailed. Here’s another funny picture. I walked in to wake up him one time and this is how I found him, dead asleep with the carton of chocolate ice cream melted in his bed. I do think I have firm rules and set consequences, but sometimes I really can’t help but laugh. :D 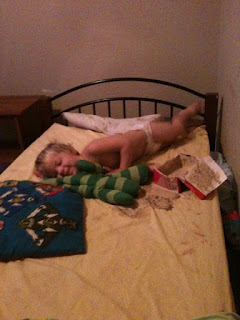 He was sleeping with that big giant smile.
It was really hard to be mad when I walked in to see that.

One funny little story about Titus is I really liked when he was learning to go pee pee standing up instead of sitting down (he was probably about 2 ½ or 3 years old).  In order to show him how to really do it without creating a urine river by the toilet, I would stand beside him and we could both pee together. The first time and every.single.other.time. we practiced pee peeing standing up, he scream at the top of his lungs “DADDY! Your Pee Pee is SO SO BIG!” Needless to say, I really thought it was hilarious when taking him to public restrooms. Every time we would be in the stall, he would be shouting at the top of his lungs about how big my pee pee was. We would walk out of the stall and I would look at all the other men in the bathroom waiting to go in and look at them with this look, “that’s right, you heard him. I’m the man”

He is also pretty blunt. He is very kind and nice and really likes mostly everyone. However, if he’s in a funk or having a bad day just let him be. Clearly the school portrait photographer didn’t get the memo. 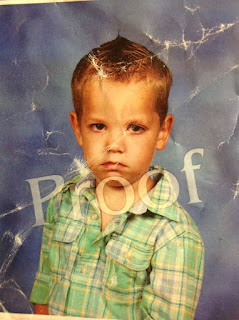 "Dude, I'm not the mood for your crap. Just take the picture."

Titus is also very outgoing. Whenever we are anywhere, he is constantly throwing out his arm with a big wave and saying the happiest “Hey. How are you?” Every time, I lean down and ask him where he knows them from and each time he replies “I don’t. I just wanted to say ‘hi’”. Titus is quick to make friends and loves to give away his toys and things to his friends. I love this about my kids. Titus really and genuinely wants to be a person that makes me happy. That makes him happy. When he is happy, he gets so giddy and silly. I absolutely love it. Speaking of making people happy, at least twice I week, he sneaks off by himself and writes little letters or colors a picture and sticks it in an envelope (I give him the junk mail envelopes) and sticks it in the mailbox. He runs up to me with that little smirk and always says, “Daaaadddyyyy, I think you need to check the mail.” Of course, we run out and he’s just dying laughing from excitement and we open it together. It’s our little thing and I love it. J 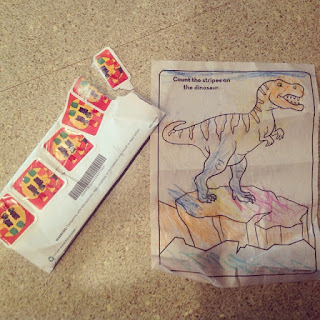 #lettersfromtitus
For being a boy with three sisters, he handles his sisters quite well. He is kind and thoughtful. He is learning that we open the doors for girls and always let girls go first. I really enjoy teaching him little things that I think are important, especially on how to treat women. I think he’s an excellent brother and will make such a Godly and wonderful husband. HOWEVER, that’s not to say they don’t fight. His big sisters are still at the age where they beat him up, so he typically resorts to some sort of revenge. I know it sounds weird, but his little revenge tactics are kind of genius. I mean, they are really bad, and he gets in big trouble, but he thinks of my most random stuff. One time, Neela and Titus were arguing, so Neela ran into his room and threw one of his toys (of course it broke). Titus was fuming mad. I was expecting world war 3; however, he just walked off to the back of the house. To myself I was thinking, “Ok. I am going to have a sit down with him, but first I have to Neela and address what she just did.” After about 2 minutes, I hear him busting out laughing in the back of the house. Not like chuckling, but full fledge LAUGHING. So I stop talking to Neela for a minute and walk to the back of the house… I found that Titus has stacked up all of Neela’s VHS movies on the floor of her room and is currently peeing on them. Of course, I had to run out of the room because I was about to bust out laughing and he really needed to know that it was bad. So when I finally caught my composure, I finished talking to Neela and then sat Titus in his bed and tried to hold back laughing when I said “Titus, did it make Jesus happy or sad when you peed on your sister’s movies?” 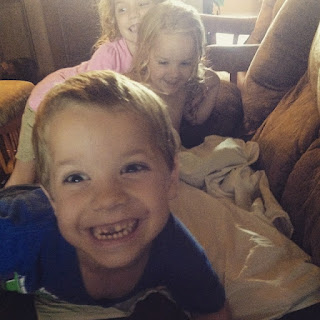 He is really so so funny to me.

But yeah, Titus is my little buddy. I love spending time with him. He is so fun to be around and I love seeing how much he loves to make sure everyone is happy around him (even if he claims that “Everyday I forgot…”